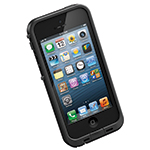 Cons
Muffled music and videos
LifeProof recently sent in two of their iPhone cases for evaluation. One for iPhone 4S and one for iPhone 5. Previously with my iPhone I've been using an Otter Box case. I liked that it had a rigid case that was surrounded by a soft rubber case. Sadly, after about of a year of use my Otter Box was looking like it needed to have a plastic surgeon tighten up the outer rubber case. Over time it had stretched so much it no longer lined up with the rigid case under it.  I had also knocked loose a piece of the hard plastic case near the top after only six months. Gladly there are a lot of new choices and LifeProof may just be the ticket for anyone who needs a case right now. LifeForce claims their cases are water proof to 2 meters, dirt proof, snow proof, and shock proof.

Upon looking at the LifeProof case I was immediately struck by how slim it is. It is only slightly thicker than the phone itself and uses a seal around the entire unit rather than tabs to hold the two halves together. Inside the back half of the case is a rubber o-ring seal that is in the groove that the upper half snaps into. This seems simple enough since this is how watches achieve water resistance but consider that you have to be able to hear and be heard with your phone. This is where LifeProof makes a very nice advancement. To achieve their 6.6 foot water resistance rating they have to employ some interesting membranes in the areas where the mic and speakers are.

To achieve their water proof rating they had to design an interesting screw in headphone jack cover that has an o-ring. Included in the box is the short extension 1/4" headphone plug that screws into the case with its own o-ring seal. Just plug your headphones/speakers into this adapter and you are off and running. I didn't try swimming with this case on my phone but say your work or fun takes you close to the water this is a feature I haven't seen on any other cases.  I've dived in pools before to pull a kid out if they got in too deep ruining a phone and my wallet in the process. Nice to know if I had to I'd have a working phone afterwards. If you don't need the headphone jack accessory there is an included plug that screws in with the same o-ring.

The case is easy to put on your phone. Make sure you clean your screen completely with the included microfiber cloth and then snap the two halves together. The bottom half of the case has a door which covers the phone charging port. Inside this door is a silicone rubber type seal that presses against the opening. If there was going to be a failure point this is where I expected it. Since I have to charge my phone nightly I'm going to be constantly accessing that door and I feared that the seal wouldn't hold up. Although its still cold out to test in a pool I did find about a 3 foot deep backyard pond to drop it into. Mind you, the idea of throwing my perfectly working phone into a pond doesn't just seem crazy to you. I was hyperventilating the 20 minutes I waited to fish it out. Thankfully all the seals worked perfectly. If it didn't I'd have to pony up some serious cash as I'm early in my contract with my carrier but now I know this case definitely performed as expected.

One thing that really impressed me about this case is how well all the controls line up. I always had problems putting my phone on silence with the previous case. This case lined up beautifully and everything was as easy to control as though I didn't have a case on the phone. Why does this seem so hard for so many manufacturers to accomplish? The door that covers the charging port works perfectly with factory Apple iPhone adapters. I have one cable that is aftermarket that has buttons on either side of the plug - you cant reach those buttons with this case in place. Make sure you have plugs that don't have those release buttons. This also brings up that the tight fit not only keeps water out but keeps dust/dirt out. All the while still allowing the controls to feel like stock. Nice

As for shock proof LifeProof claims that the phone meets the military standard of a 6.6 foot drop (2 meters). In the regular world a shock rating doesn't seem very interesting but at my work I carry radios and use medical equipment that has to meet drop requirements. Why? Consider that someone can fall on that equipment or a carrying strap can break - if a device can't meet a simple drop test you shouldn't expect it to last long in the real world. A 6.6 foot drop is pretty standard for firefighting/medical equipment. The fact that I usually drop my phone a couple times a week and didn't get any damage to the case or the phone proves why this rating is important. Its a very robust design considering how much thinner it is than my previous case.

This case is definitely the real deal. I didn't get to test to the full 2 meter depth water resistance but I dropped it from close to 6 feet five times (sadly not on purpose). My previous case let dust in between the clear shield over the screen and the phone. That's annoying and makes using the phone more difficult to use. This case completely sealed out dust.

One problem that comes up is that those water proof membranes make listening to music or videos very hard. They may let sound in and out for a conversation but it seems like the sound for full spectrum audio gets muffled. I found that opening that door that covers the charging port allowed the sound to become normal. Kind of odd but that's a trade off for the water proof rating.
That was actually the only negative I found with these cases. Everyone can use a case that protects their phone so well. $80 is at the top of the price range for a phone case but if you consider your phone an investment and consider how much you'd have to pay if you did damage it then this is money well spent. I'm going to try and take underwater pictures and videos in the pool this summer. I'll report back if I find any problems.

LifeProof has all sorts of accessories that work with their cases to let you use your phone on your active lifestyle. Several colors are available too.