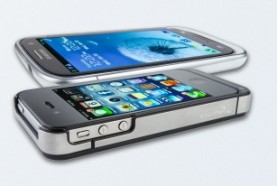 Pros
Doubles your phones battery power
Solar charging
Fixes the iPhone's lack of a micro USB connector
Cons
Slick surfaces can make it fall out of your pocket
This last CES was a boon for us with great products to work with. Today we are going to look at one product that may be the most useful product of the entire show. EnerPlex was kind enough to send both an iPhone 4s and Samsung Galaxy S III Surfr for review. What's a Surfr? How about an external battery and solar panel built into a phone case? This is one of the best ideas in phone cases in quite some time. Anyone with an iPhone knows the pathetic battery life of a heavily used iPhone.

The first Surfr I opened was for the iPhone 4s. The case is surprisingly small - only extending about 1/4 inch below the phone. On the rear of the unit is the aforementioned solar panel. What isn't obvious is that there is an extra battery in the case to give you backup power. The iPhone simply slides into the case and a top cap is slid into place. That's it. No complicated assembly or multiple fasteners to close. The case quite a bit of heft to the phone. It doesn't double the weight but it is a noticeable increase in weight.  The battery gives you an extra 1400 mAh of energy for your phone and coming in at 72 grams thats a lot of voltage for the size of the case. One hiccup with this case is that it uses a micro USB port on the bottom of the case for charging. This is actually a minor concern because the other end of the charge cable is USB and my computer correctly identified my phone and launched iTunes.

The Samsung Galaxy S III Surfr is even easier to put on. The phone slides in and the top cap is actually held onto the main case with two small plastic extensions. Slide it down and the phone is secure. In particular the Galaxy version of the Surfr is very elegant looking and incorporates beautifully with the design of the phone. The battery in the Samsung version of the Surfr has a capacity of 2100 mAh with only 70 grams of extra weight. That's a huge increase in battery power. One of the S III's strong points is its battery life but who couldn't use more battery power?

Over two weeks I found myself in love with these units. Something functional like a phone case shouldn't make me feel that way but suddenly the usefulness of my phones was increased. With the iPhone I regularly ran out of power by the early evening when I'm getting off work. Having to always plug it into a charger in the car on my way home gets pretty annoying. With the Surfr case I suddenly found myself at 50% power when my phone previously would be dead. The trick to get this far with your battery life is to use the reserve power in the case once your phone's battery drops low. I usually waited until about 10% on the phone battery. Once you hit the power button in the lower left corner of the case the extra battery begins powering your phone as well as charging its battery. You'll know this is happening because the battery charging symbol will be on the phone's upper right corner. The Surfr has 4 blue LED's at the bottom of the case to let you know the status of the battery in the case.

I was really disappointed Apple didn't go with a micro USB connector on the iPhone 5. Other manufacturers have agree to make this the universal charging port for their phones. Apple continues to buck the system but luckily this case fixes that. Why is this a big deal? For every iPhone user at work there are four or five phone users whose phone chargers are micro USB. I've literally insured that I'm never too far from a charger should I need one.

The Samsung Galaxy S III version of the Surfr is even more impressive. My wife is constantly replying to texts and emails from work as well as using her phone to do research for her work. She's been able to go easily through a day and often as long as two days on one charge. Both Surfr cases are intelligent - when plugged into a power source they will charge the phone's battery first then charge the external battery.

I haven't even covered solar charging yet. The panel on the back of the unit is very impressive. We've all seen those science fair projects that feature a solar panel powered by a lightbulb. Usually the panel powers something like a tiny fan to show how solar power works. To function as a battery charger for a phone this panel has to put out a consistent 5v. Any more or less could damage the batteries and shorten their lives. During a 10 minute drive I threw my phone up on the dashboard and found that my phone battery had charged 3%. Thats pretty consistent with what I get when plugged into the wall. I tried this again with my car and found no charging. The green LED on the case never lit up. I was perplexed until I pointed my phone to the side window and suddenly it began charging. Apparently my windshield has some sort of UV blocking material that is working so well it stopped the solar charger from working. I only mention this as I had no clue my car had this.

I have to say that the versatility of this case is impressive. I found I had double the battery power and I was able to get off the grid and charge from free solar energy at work. Would I change anything? I'd add a rubber surface to the edges to make the case less likely to slide out of a pocket and fall. I had that happen three different times and it began to make me nervous about bending over with the phone in my shirt pocket. The Samsung version of this case really made that phone into a road warrior. Depending on your access to the sun you may not ever have to plug into an outlet to charge again - not very likely but I found myself becoming a lot more aware of days I could take advantage of the solar panel.