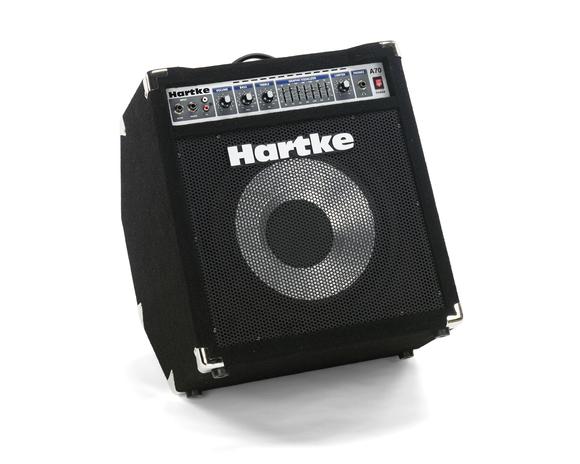 Pros
Awesome sound
Very useful EQ
Line out - effects loop - and active and passive inputs
Cons
Felt covering
May not work in a band by itself - you may need a bigger cab or PA system
RCA connections for the CD in - 1/4" would have been a lot more useful
Normally the words bass and combo together means a small amplifier used for practice without many of the features professional musicians desire for their needs. Today we are looking at a possible solution from Hartke. Combos offer a lot of convenience - the speakers and amplifier are housed in a single enclosure. Unfortunately bass equipment prices all over the map. Can a $300 'practice amp' be a true dedicated solution for bass?

Hartke is a name synonymous with bass gear. At this point I have to confess to everyone I'm a guitar player who dabbles in bass. I don't primarily perform on bass so I don't need a full dedicated stage rig. I do, however, need something to work out bass lines and play with as well as something that a friend can come over and plug into. This means I won't need an amplifier capable of 'stage' levels of volume but one that has great sound and lower volumes. The fact that a combo takes up less space was a clincher in my decision to search through the available bass combos.

I went to my local independent guitar shop - Squeetones. As they are primarily a guitar shop they only had the smaller A35 and A70 for sale as well as a used Mesa Boogie head and cab. Due to size and price the Mesa Boogie was automatically out but I played with it anyway. I could produce smooth sound but had difficulty bringing the volume levels down to home use levels. Next I tried the A35 and finally the A70.

The A70 dimensions are approx 19" H x 17" W  x 15" D. This is pretty big by combo standards but big is very good with bass equipment. In order for a speaker (driver) to make sound the cone has to move back and forth and push the sound waves out - this means that air is also being pushed backwards inside the cabinet a speaker is housed in. The aluminum driver in this cab moves a considerable amount so the cabinet has to be able to allow a lot of air to move around in it. To help with all this air movement Hartke added a huge port on the back of the combo which adds a tremendous amount of bass accentuation. One feature that makes this look like a monitor speaker is that the unit can be tilted back about 30 degrees pointing the speaker up towards your ears. This help treble frequencies, and coincidentally, points the port on the back of the box towards the junction of the wall and floor. Put the port too close to a wall and now air can't move in and out of the combo effectively - you've just muffled your port. Pointing it down slightly actually gives a small increase in the distance to the wall. Since bass frequencies aren't so directional this doesn't hurt the sound but it does make sure you didn't just turn your speaker into a closed enclosure design.

The combo is not vinyl/tolex covered like most amps and equipment. Its covered with a fabric that is just slightly fuzzy. This isn't Carvin 80's rat hair covering but its pretty close. I'd much prefer a more traditional covering. This stuff attracts lint and dust like a dustbuster commercial. The control layout is simple - active or passive inputs depending on your type of bass pickups, volume, bass and treble controls, the EQ section, and the built in limiter control. Limiter? This doesn't limit your sound - you can control how percussive and loud individual notes are without lowering your volume. As the sound really sweetens at around the half way point on the volume I like that the limiter keeps slapped and pulled notes from overshadowing the other notes. Just pass noon on this control I found a sweet spot where the sound was still able to rumble without those slap or hard hit notes coming out too loud. Any more of the limiter and your volume stays the same but the notes lose their initial attack. This may be handy for playing jazz while lowering the limiter control worked well for hip hop and rock music.

The amount of bass this combo can produce is startling. I could literally rattle walls in my practice room with the volume at noon (half way). This is also a sweet spot for the sound - less volume and the unit is very clean but lacks rumble. Start moving air by raising the volume and suddenly that port becomes much more important. The sound works well to about 75% on the volume. Any higher and the small amplifier starts to lose steam. There are small increases in perceived volume but the quality of the sound begins to suffer. This is where a tube amp gets nice overtones and distortion but on a non tube amp like this the distortion produced is interesting but lacks the sweet overtones.

The built in limiter is one of the most useful features of this unit. You can really loosen or tighten up the sound with it while still leaving your volume at a good level. I really appreciate that the unit not only has a bass and treble knob but a real EQ section for the mids. Once I got home the heavier carpet in my music room ate the bass frequencies so I adjusted the bass knob up to my liking and then fine tuned the sound with the EQ section. Want a punchy jazz sound? Reduce your lower frequencies and accentuate the middle frequencies all you want in the EQ. Need a loose sound that can be literally felt? I was able to also achieve this which is surprising for such a small enclosure. That 12 inch aluminum driver is something else. I could see it move back and forth almost an inch as I popped some low open E notes.

The output is 8 ohms from the amp so I unplugged the 1/4" plug for the built in speaker and hooked it up to one of my guitar speaker cabs that has some really nice Jensen speakers in it. This cab works at 8 ohms and produces a lot of bass without having a port so I find all the guitar amplifiers I hook up to it have to have their bass levels dialed down. This isn't a dedicated bass cabinet so I wasn't expecting as nice a sound as the built in speaker could produce. I was pretty happy with the results - smooth and deep sound but the thunder was definitely missing. That aluminum speaker is really something else. I got much better sound from the combo's aluminum speaker although volume levels were much much higher with the 4x12 cab. If you have a true bass cab available that works at 8 ohms you can get some surprisingly good results with this little amp. The volume increase with this experiment has nothing to do with 4 speakers versus one but with the efficiency of the Jensen speakers. Generally you only get a 3db increase in volume when you double an amps power, i.e. going from a 50 watt to 100 watt amp. Take that same 50 watt amp and hook it up to a cabinet with very efficient speakers and you can exceed 3db of increase easily. This seems counter intuitive but the reason so many artists went with bigger and bigger amp setups had more to do with the speakers available at the time than the amps themselves. I've heard an AC30 (approx 40 watts) blow away a Marshall 100 watt head in volume!

I didn't play with CD input. I have a dedicated music amp and speakers to play along with so I can't discuss that feature. Its there if you like that but the RCA inputs may limit its usability - a 1/4" input would have allowed the use of MP3 players which I think most people would prefer. Backing tracks played through a bass combo probably don't sound very good anyway.

The sound out of this combo is phenomenal. Totally what I've heard from much larger Hartke units albeit at lower volumes. I'm sure Hartke intends this unit to be used for practice but wouldn't it be great if you could have your cake and eat it too? Instead of hooking it to a big cab like I did you can always use the XLR line out on the rear to hook into a PA system. That makes this unit killer for being transported easily and being able to hook up to whatever is available when you get to your show. There is plenty of power here for playing in small clubs and bars but as the size of the space increases beyond that its sound disappears quickly.

The EQ section is well thought out and one of the most useful I've ever seen. Kudos to Hartke for including it on a combo. I'd really wish I could have checked out the A100. With extra power in the amplifier and a bigger enclosure I think we would have found a more efficient setup. Bigger speakers tend to have slower response but I'm a believer in these aluminum speakers after hearing the difference with a regular cab. The Jensens in that cab are very good speakers but they aren't designed to be true bass speakers. Saying that, you'd be surprised how many guys I know who use guitar speakers with their bass.

Appearance wise I'd really prefer another option to the rat  hair. It looks good new but I've seen old gear covered with this felt like stuff that just look tattered after a few years. I'm not too worried since it is going to stay in my music room but its not something I'd expect to hold up for somebody who uses this to gig or travel with. If you are planning to travel with a bass combo to practice you should invest in a good flight case anyway.