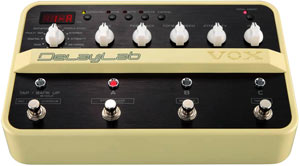 Pros
Very versatile
Cons
Steep learning curve
Manual needs an upgrade
My son has a forbidden love that dare not speak its name: the love the delay pedal. I like delay effects but I find them often overused and this is one sound that can definitely get tiring when used a lot. Previously my son was using a Boss delay pedal that worked very well but lacked one critical feature - the ability to tap the tempo into the effect. To change the tempo of the effect you'd have to set it manually with a dial and then pray the drummer plays that tempo exactly during the performance. You can see where this is already not going to work for live performances - being able to set the tempo on the fly is critical. After trying several pedals we settled on the Vox Delaylab but had we had another $100 to spend at Squeetones that day we may have come home with another pedal that was just as useful but added a tube for a little more tone.

Pedals are definitely getting bigger. This pedal is the size of three or four pedals set side to side - this is not something you can just throw on your board without some rearrangement. After a lot of experimentation I found an arrangement that worked well. The pedal features 30 delay types and is touted to have many presets for popular songs. Unfortunately the manual doesn't go into great detail how to achieve these presets. Max delay time is 4 seconds adjustable in 1 millisecond increments. Stereo input and output make this an interesting pedal as well as the ability to hook up an expression pedal to gain further control over the effects. Also included in the unit is a looper function - record a riff and then play a lead on top of it. Great for practice and even better if your rhythm riff needs to be rock solid and never changing. In the box was the unit, the manual (which could have been a lot better), and the power adapter. If you need to use batteries you'll find yourself using 6 'AA' batteries. That's a lot of batteries to achieve nine volts. The housing itself is diecast metal which is good for surviving use and abuse.

A lot of the delay types are what I would call standard for a delay pedal - tape delay, echos, analog delays, even lo-fi delay effects that have a vintage vibe to them. Delay types are controlled by the knob on the far left. The next knob is the time setting in case you want to rotate a knob - I find it easier to tap the switch on the lower left but to each their own. The next knob is the feedback knob which is very handy to get cool distortion added to the delay effects. The next three knobs are speed, intensity, and mix. This is standard stuff for a delay but mix - oh man. You can go from a 'dry' source only sound all the way a 'wet' sound that is heavy with the effect or anything in between. Often leaning towards dry allows the original tone played on the guitar to be more enhanced while going wet really makes the echo effects sound like exact repeats of the original sounds.

On the lower half of the unit are the four foot switches. The left most is used for tapping in the tempo and when using the looper will control rec/play/overdub functions. Be forewarned there is a thorough description on how to achieve all this through one switch in the manual but often as you follow the directions the expected result doesn't happen so you'll find yourself frustrated. The next three switches can control stop/clear, reverse, and trigger. I found that a tricky thing so instead I used them to write three presets in so that I could rapidly switch from one delay type to another. Again the manual let me down when it came to using the foot switches to control unique functions.

One thing that isn't so obvious is that there is no decay control. You'll find the mix knob helps with this as does the feedback but I like when a delay effect is more subtle - a gentle echo rather than in your face equal volume echo. There is a time and place for that intense effect - but play like that for a few songs and the audience will start to lose interest in your echofied sound. A decay control could have made getting from intense to subtle very easy. That said this pedal has the widest variety of delay effects I've come across. You can get a flanger effect with experimentation, something that approximates a phaser, and some effects that are so radical it seemed I had a bagpipe or sitar coming through the amplifier. I found playing with drone notes and playing over them was fun - at times it sounds like the notes are playing backwards - decayed volume at the beginning and the attack at the end. Some effects were right out of old albums - effects I do like a lot.

I see delay as an effect that can be like icing on a cake. Too much and nobody tastes the cake. Generally the less you use the better it is but some of the best songs feature use of analog and tape delays in an in your face kind of way so to each their own. As for this particular pedal it is well built. I really like it except for the learning curve to get the sounds I want. I'd rather be playing than experimenting endlessly. This is where a section in the manual with settings to try would have been good and I think showed off a lot more of what this pedal can do. I'm sure with time I'll find even more interesting sounds but if I had to perform with this pedal a day after getting it I would be worried if I could get to the settings I need. As effects get more and more sophisticated I'm amazed that manufacturers still think the 6 page manual (with all the legal warnings and such) is enough. I would like to see a DVD included so that the player can follow along and get great sounds quickly. That said this pedal has lots of flexibility and totally fits the bill for my son's use.