By Victor Oshiro | Posted August 28, 2013 at 10:05AM
As we continue our addition of musical audio equipment with our normal tech articles and game reviews it came to me that perhaps a quick tutorial on pedalboards and organizing pedals was needed (clever title eh?). This article isn't going to cover preamp equipment which generally is rack mounted or stand alone preamp boxes. We're going to concentrate on just the basics and the sequence that most pedals should be placed in to optimize their sound and make sure your listeners aren't thinking they are at a concert turned evil experiment to ruin their minds.

The first essential should you have enough pedal is picking a board. This can be as fancy or as simple as you like - Eddie Van Halen was often mocked in his early years as he literally had his pedals mounted on a flat wooden board. He only needed a way to carry and organize his pedals - he wasn't worried so much about protecting them I guess. I'm also guessing he was still using batteries in his pedals and not an external power supply.

Examine your current need but give yourself room to grow. You may buy the perfect board and realize six months later that now you want to add that one new awesome pedal you got for Christmas only to find that your stuck.

Consider how you'll route these wires - and how you'll get power to your power supply. Most power supplies are 9v but some pedals need 18v. Generally those pedals will come with their own power supplies but you'll still need a power strip and an extension cord. Better to have everything in front of you when you are stage left so you can quickly troubleshoot a problem like turning the power strip back on then having to run off the stage to figure out what happened. I've had a wayward drunk step on my power strip that was off stage and literally take me out of the band. Lesson learned.

Every music store has their bargain area and seems like patch cables live here. They shouldn't be too expensive but check these closely - if you can unscrew the covers behind the 1/4" plugs and check the soldering. Is the wire super thin or thick? Well insulated (the wire - not the whole cable) patch cables with good connections are a little more expensive but well worth it. From time to time someone calls me and says I can't figure out whats wrong with my pedals. They were fine yesterday. By replacing patch cables one at a time you'll find the culprit - throw it away or it'll end up back in rotation. 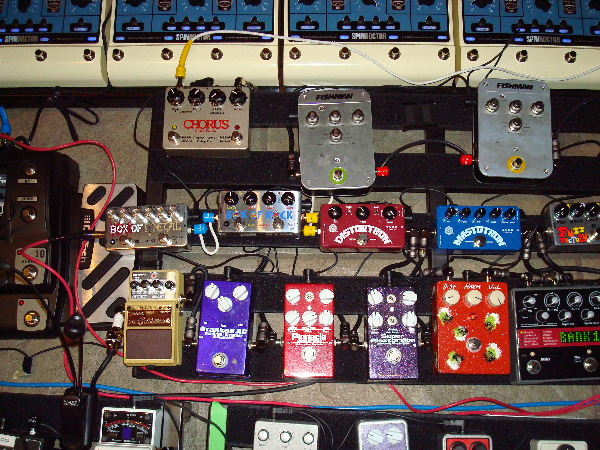 Having the tuner early gets it the cleanest signal from your instrument - also if it is equipped with a bypass function you are muted while it is engaged which is handy for moments when you aren't playing. Putting the volume pedal early in the chain lets you control how much signal everything after it will get - crucial for getting some cool tone. Overdrive and distortion pedals should come early in the chain - they create the main course the other pedals will add the seasoning to. Put the OD ahead of the distortion - then you can overdrive a clean tone, add distortion (you'll get more effect with the increased input the OD gives) or just run the distortion solo.  Time shifting pedals like phasers, flangers, and delays work well here. Tone shifters like wah pedals work pretty good after distortion as this gives them more to work with. Add phasing and a wah can get weird but try it. Wahs are unique as you can move them around and get very different results depending on their place in the sound chain. Compressor sustainers raise the volume of the softest notes while lowering the volume of the loudest notes - basically flattening the dynamic range but making the softer hit notes more useful. Lastly but certainly not least is the noise suppressor to remove all the noise and artifact created by your pedals.

You may not have all the pedals I've covered. No biggie. Try them in this order and see what you think. Now I'm going to tell you to break the rules. Try your distortion pedal first, or wah even. I've gotten some cool results with a wah right after the volume pedal and before the overdrive and distortion. Move distortion ahead of OD or put them at the end of the chain. Move your pedals around until you are happy then stick them onto your board. You may need long patch cables if you want to organize your pedal board to fit as many as possible but want to follow the layout I've listed. That's ok. Its all about having fun so go for it and dive in - don't be intimidated by those gigantic setups you see some pros using (Vernon Reed comes to mind). Cheers!