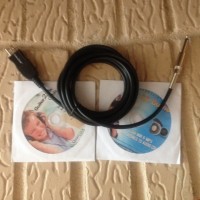 Pros
Tremendous value
Easy to use
Good software included
Cons
Does what it promises so no cons on this one
Seems like any recording devices for audio to computer or instrument to computer cost a hefty investment. Its not unusual to see equipment costing $200 or more and that is a price that can really hurt a struggling musician. I came across ClearClick Software's Guitar2USB setup a short while ago and I think I finally found a lower cost alternative that more importantly works just as good as the expensive rigs. Unless you have a very good sound card in your computer using the audio in plug is going to frustrate you as most computers produce a lot of background noise.

The device itself is basically a ten foot long 1/4" audio cable with a USB connector at the other end. It's not as simple as that obviously because the USB end of the cable has to convert analog audio into digital signal that can be transferred through the USB connection of a computer. Also included in the packaging are two CD's:  Audacity Audio Editor and  ClearClick's Audio CD Burner. Why the programs? If you are fortunate enough to have a high end program for recording you are miles ahead as this equipment is designed to work with any program. If you don't, using the built in recording software in your computer probably won't lead to great results and as it turns out Audacity is an easy to use audio recorder/editor. The Audio CD Burner software is handy for taking those audio files you create in Audacity and burning them to CD so they can be heard on conventional CD devices.

At $29.95 we are already getting a tremendous value here. The conversion cable (which by the way is pretty long so you aren't tied to the computer), an editor and recorder, and lastly a CD burner program. Am I tingling the value center of your brain yet? The cable could easily go for more and both programs are easily a good value at $30. The fact that you get all three for this price is pretty amazing and shows a big commitment by ClearClick to working and starving musicians. I almost forgot to mention this setup works with PC and Mac.

I'm using a laptop with Windows 7 64-bit installed. This is a perfect platform for this test as I get terrible audio quality if I use the audio-in plug to try and record. First thing is to install the instrument to USB cable. Just plug it in and Windows automatically detects the equipment and downloads the drivers and you are up and running. Pretty painless. Next I installed both programs which each come on their own CD. No problems to report there either.

Did I mention perhaps a better name for this product would be Instrument2USB as you can go with the 1/4" cable plugged into just about anything - synthesizers, bass guitar, amplifier line out, and of course guitars. If you use a lot of effects to achieve a sound I think the best connection would be the line out on your amp as you'll capture the exact sound of the preamp before it goes to the power amp section. Go crazy here folks. The flexibility of this design means you could even hook up a mic with a mic to 1/4" adapter.

Audacity is about as easy a recording programming you can use and I like that it is freeware that has been developed by a whole community. Click 'Track' to start a new track, select mono or stereo (or label or time track even), and press the big record button. Bam you've just laid down your first track. Add another and so forth and you have your demo done. This works great for me as this is the process I use to record as I have to lay down the different instruments for a track. You can go all the way to 384,000 Hz recording rate with 44,100 Hz being the default. Instead of a click track to keep time I use a drum machine to lay my first track. I record rhythm instruments next and finally guitar. Once lyrics are added I can delete the drum track to add real drums once I can get time with a drummer friend of mine. He is super busy so I don't waste his time recording drum sections over and over.

So we've recorded a track. Big deal right? Now we can add effects: echos, reverses, fade outs/in, and on and on. Go nuts guys. This is the magic that can happen in a studio. Add a little tremolo to acoustics or even wah-wah to your guitar should you not own a wah pedal. Once you have a track the way you want you can convert a stereo track to mono should you want to move the sound of one instrument to left or right. There are so many features I'd have to write a whole review just for this program to mention them all but believe me its more complete than you'd expect from a program that was created as freeware.

Now remember this isn't a multi-track recording program - you could however use a good mic centered a midst the sound to capture the different instruments simultaneously. At home I record one instrument at a time so this is the setup I need. I don't always need to pay my buddies in food and beer to record a song I wrote this way although nothing beats the input of others. As I see it I can capture all this sound and give my buddies the songs to learn and let them help me create a better song. One effect oddly missing is reverb but since just about every amp can add that its not a deal breaker for me. Now if you are recording vocals you should be trying to capture a natural reverb sound - and nothing is as good as a shower for that at home.

Audio CD Burner is even easier to use. Launch it - hit the '+' to add a file of music made with the Audacity software and then press the 'Burn' bottom at the bottom. What's easier than that? All the conversion to Audio CD format is done without too much input. You can also select other output modes such as Disk-At-Once-Raw if you know what format you need it in other than audio. A handy time ruler is at the bottom so you don't try to add more music than a CD can hole - typically 83 mins.

You can't argue the price point/value of this setup. Being right at the $30 mark makes this well within just about everyone's reach. Remember, we spend tons on our gear but having a full on recording setup isn't always practical. Some of those tools, like mixers, can be used with this product to get better results meaning you may not need that expensive recording equipment after all.

If you are just starting out wanting to record your music this is definitely a great way to go. The cable is rugged and simple to use while the software is much better than you'd expect at this price. ClearClick also has similar equipment with different connectors available so perhaps those will spark your imagination. Would I change anything? I can't see making changes and keeping the great price so I'd say no. One of the best benefits of this gear is that you can continue to use the cable as you decide to use other software for your recording. I can't stress enough how much better the cable in this package is than trying to use the audio in plug on a computer.