Pros
Fun gameplay
Regular updates improve the game
Cons
Repetitive music gets old quick
Controls are limited by current hardware
Motion blur would add immersion to the game
I had thought to originally release this review during the holidays. My logic was that what better than a game played on mobile devices to pass the time during the holidays? As it turned out I had a very busy holiday season with family and work so just goes to show how the best laid apps of men aren't reviewed on time.

So basically what is EA's Real Racing 3? RR3 is a racing simulator designed to be played on Android and Apple mobile devices. Better yet, the game is now free and is regularly updated. Buy a car, upgrade it as you progress through races, and keep moving through racing series. This isn't an original concept for a race game - just about every racing game follows this formula. What is different is that you can add online friends to play against, and with the latest update, even race directly with other players online.

First off let me say that the graphics in RR3 are pretty good. Where would I place these? I'd say they are similar to the graphics that I saw on the PS2 - specifically Gran Turismo 3 comes to mind. The resolution is very good, and depending on your device, the frame rate is also good. I've played this game on my iPhone 4s, an iPhone 5s, and a Samsung Galaxy tablet. The frame rate is much smoother on the iPhone 5s and Samsung tablet so I'm going to say that the 4s is about the minimum hardware necessary for decent game play. So if the base graphics are good then everything is great in that department right? Wrong. What is missing is motion blur. Without this there is no sense of speed. The game may say your are doing 200 MPH but the environment looks exactly the same as at 0 MPH. To me this is a critical component that just wasn't incorporated into this game. Funny that a game as old as Gran Turismo 3 had motion blur. 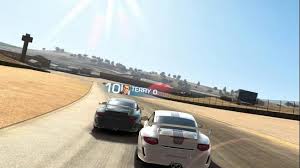 Controls are where this game is actually a standout (and a failure due to the current state of hardware). The game effectively uses the ability of devices to sense rotation to enable control. Turn your device left and the car steers left. I found that turning down the calibration from the preset level helped a lot. The game is surprisingly good in the corners. Slight adjustments translate immediately to good car control or disastrous mistakes. So if this is so good why do I knock current hardware? Brakes can be set to be automatic (which I recommend) or an area of the screen can be designated for manual brake control. Although this does let you decide when to apply the brakes it doesn't let you feather the brakes. On all devices I tried the screens can't determine the difference between a light touch of trying to slam on the brakes. With an actual game controller you can lightly apply the brakes while still on the gas - just like a heel/toe maneuver in a real car. I find that in most games as I get better I can brake later in a corner to keep as much speed as possible but sadly the preset level of braking in the game doesn't allow that. Perhaps some devices will incorporate a pressure sensitive button in the future but I doubt that is a priority with tablet or phone designers.

Certain features like ABS brakes can be disabled which seems to help in certain events. I found that powerful rear wheel drive cars can get a little more wheel spin in corners which helps with exit speed but just as often not having ABS can hurt performance. Steering assist can also be lowered which actually makes the game trickier. I think the control assists are pretty much mandatory. I've noticed some players I played against online have much faster lap times so obviously the brakes and controls can be mastered with the right hardware to improve performance.

The last thing to note is that the artificial intelligence in this game is a work in progress. When I first started playing a few months back the other cars in race events may as well have been on rails. The cars followed a predetermined path on the race tracks and if you happened to be in a spot on their predetermined path they'd hit you. After a few updates the other racers still stay on their predetermined course but now at least you can work your way around them on the course more easily. A small bump can cause them to pull away or let you get the line through the corner - previously this was going to cause an accident. Speaking of accidents, with the latest updates there are a few random accidents involving the other racers in front of you. Dodging a sliding car is actually a lot of fun.

Overall I like this game. The career ladder is pretty good but tedious at times. An upgrade on a car can cost an unbelievable amount of money but the races for that car can pay a small amount. You'll find yourself playing events over and over to keep building your bank account just to buy the upgrade for another car. It is what it is. Many games give you a free car when you complete a series. You can use that car for another series or sell it for money. This would be a great upgrade for RR3 as repeating races over and over to build up the war chest gets tiring. Also, I've gotten to where I've turned off the music in this game. With only a couple of songs you'll get tired of hearing this music before too long.

One area where this game has done well is its regular updates. The updates can add new cars, races, or online events. The online feature of this game is a hit/miss situation. It can be more challenging but at times its hard to ever get past a race with this enabled. Disable online play and you can progress more easily. I'm hoping future updates will add some control improvements and continue the AI improvements.