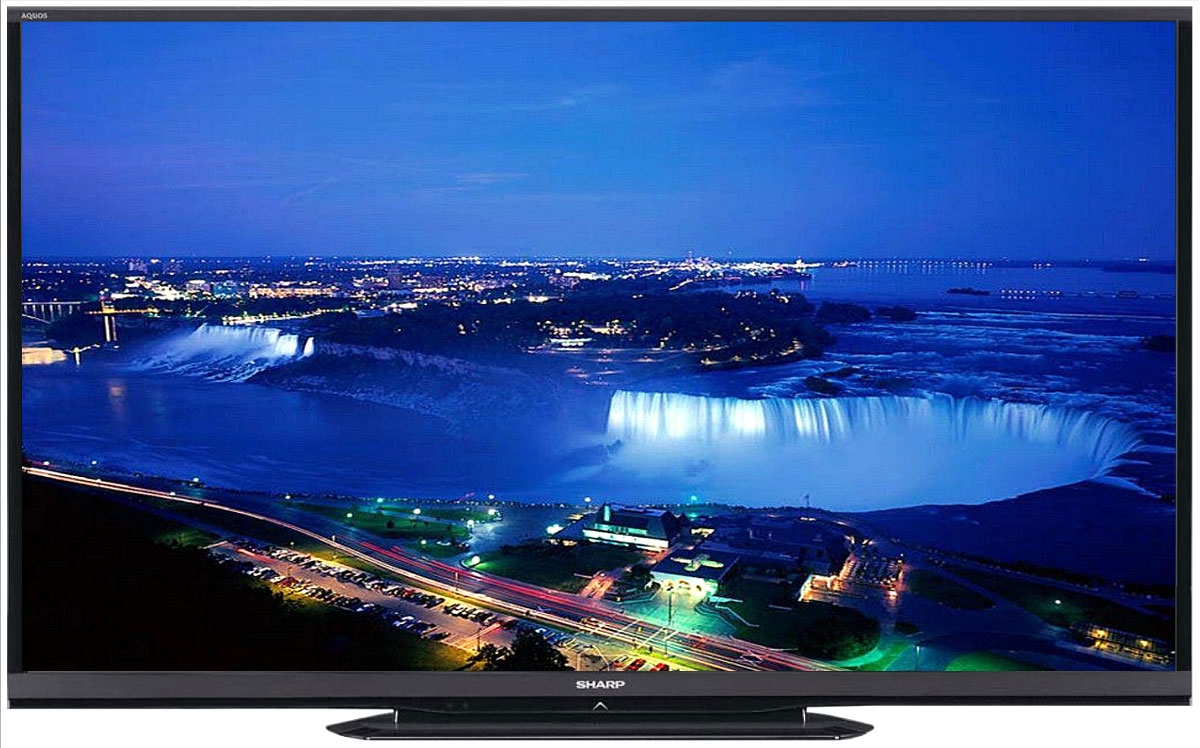 Pros
Color reproduction
Many inputs
Smart apps are a plus in this set
Cons
Wireless has to be reset if signal is lost - time consuming
Initial dark areas in the image
Tricky initial picture setup
No grounded power plug
I'm pretty good at taking care of my gear so it shouldn't come as a surprise that my last TV - a 50 inch Samsung Plasma - lasted my family about 6 years of near constant use. That TV is now being used in my bedroom but it was getting time to update to a newer set. New features and better picture image were definitely a reason to upgrade as well as power savings and larger image. I'd been scanning the sales circulars in my Sunday paper for some time and with the Super Bowl and Winter Olympics coming I knew it was time to make a decision. I chose to go with a Sharp 70". Originally I was looking at an off brand 65" but while in the store the salesman steered me to the larger set with the better picture. Surprisingly,  I bought the set for around $1400 which is an unbelievable price for such a large set with so many features.

I was somewhat surprised that the box the set came in wasn't larger. Yes - the box will easily fill the interior of a minivan or full size SUV but I brought my 50" plasma home years ago in a similar sized box. Once home we cracked the box open to see the set, its stand that has to be bolted on, a huge manual (!), a warranty card, remote, and that's about it. I'm not sure why I need a small town's telephone book sized manual in 6 languages but no media to show off the capabilities of a set are included. Let me explain later.

Once out of the box the first thing that struck me with this set is how close the screen comes to the edge of the set. Only about 1/2" of plastic surrounds the screen. This makes the set fit better in a tight location but also makes viewing more comfortable. The next thing that struck me was the massive base that this set sits on. Should you not decide to wall mount this set you can feel safe knowing the base is very well designed. Sadly, the IR sensor for the remote is located near the center of the set just above the base. I found this wasn't a great idea. If you'd like to set a center channel speaker in this area you'll find your remote doesn't work. I ended up placing my center speaker just to the left which really doesn't affect sound interpretation but does affect aesthetics. If your OCD won't tolerate this you may want to wall mount your center speaker above the set with it centered.

The set is surprisingly thin. This makes wall mounting even more attractive. Ever seen an early LCD set that sticks out six inches or more from a wall when wall mounted? The next thing that made me worry was that the power cord for this set is a two prong. No grounding prong. I don't know about you but lightning and power surges do happen where I live. Because of this you absolutely need to use a power strip that offers surge protection. Strange place to cut a corner but it is what it is.

Tons of inputs are included for both audio and video. 4 HDMI inputs is very handy as even laptops these days feature HDMI video. If you have other equipment that isn't HDMI you'll find that there are one component and one composite input. At 20 watts the audio is suitable but you'll want to take advantage a good surround system to take advantage of 5.1 over the air broadcasts.

Out of the box I used an HDMI cable to hook up my Blue Ray player. I popped in the latest Spiderman movie. Wow, I didn't like this picture at all. Due to all the image enhancement there was this odd almost 3D effect. While normally this would be nice after about five minutes your eyes tire. The color was overly saturated and the contrast between light and dark was set very very dark. Scenes shot in daylight seemed dark and murky. This is exactly why I wish manufacturers would ship their product with a DVD to help set up the image. You may have to juggle cables for the input as you set up but at least you'll get to a nice image that works across sources and different channels your set will pick up.

In the store the picture you see is generally coming from a pre-selected video source which shows off what a set can do - color, sharpness, contrast between dark and bright, etc. In the store the image of the set looked amazing - and considering its source was on coax cable and not even an HD source that's saying a lot. So you get your new set home, set it up, and bam, why doesn't it look anything like in the store? Perhaps its the dark lighting in the store? No, its that each set is adjusted in store using a setup disk that perfects the image and also makes the picture look as good as it can. Get home and the factory settings are usually not very good. Why not throw in a DVD to speed up the setup process and make the customer super happy with their purchase from day one? Also - trying to setup your color and other settings using a broadcast image is nearly impossible - so many programs and commercials use color filters to create a darker image or even show strange lighting such as that green look some movies have in fluorescent lighting - you can't possibly find a setting that works well by trial and error. Get the picture good on one broadcast and change stations and your hit in the face with a horrible image.  So what to do? I used a Star Wars DVD with a THX Optimizer to get the color and brightness set. Luckily this set keeps the settings for a video setting like Movie no matter what the input source is. After setting it with the DVD I had great color and brightness balance on my broadcast channels.

Once the picture was set I took out the DVD and put in the same movie but this time with a Blue Ray disc. OMG what a difference that setup made. Images were stunning. The shimmer on metallic objects jumped out at me immediately ( Star Wars II - Attack of the Clones ), and the yellow of certain images was incredible. Why is yellow so good on this set? Normally a set has Red Green and Blue pixels. Sharp has added a yellow pixel which really improves the look of skin tones and yellow objects. It was something that was immediately obvious in the store but even more so now with a Blue Ray image. So everything with the image is good right? Sadly, not so. With the cloud and mist backgrounds I noticed dark areas on the screen - much like inverted triangles with the bottom point extending farther into the image. I cleaned the screen with a microfiber cloth (hey - one wasn't included!) and those dark areas remained. I fiddled with the brightness and contrast and it helped but then the colors started to lose their pop. I re-performed the THX Optimizer and those strange areas were immediately evident. I started reading up on this after a Google search. To my horror this is common with newer LCD and LED TV's. Basically, the screen is composed of the outer screen we see and the sub-layer which is bonded to it. Its common for wrinkles to develop in this bonded screen which show up as slightly darker areas. One recommendation was to turn down the Back light control - I turned off all Power Saving options and turned the back light as low as I could tolerate. This helped tremendously but in white saturated images, such as the snowy backgrounds of the Winter Olympics, those dark areas were there again. Now I'm not talking a dark area like a shadow. My family thought I was being crazy playing with the adjustments but once I pointed it out to them they started to notice these areas too. Solutions? Warranty claim seems to be the most common but one suggestion was to push from the center of the screen with a cold object to the edge. This did help but only for a short time. The better solution seems to be to loosen the screws from the back of the set to loosen the case that surrounds the screen. It seems that the screen can be somewhat distorted when these screws are over tightened. This helped more than anything else. I'm sure the equipment that installs these screws is preset to a determined torque - why not lower this setting to just snug or better yet redesign this casing? One thing I know about wrinkles in plastic is that they can be removed with heat. It did seam that these dark areas faded with more use of the set prior to the screw loosening.

I've had the set for near a month now. I'm very happy with the image now that I've corrected it with the fixes I found online. I wish this wasn't necessary for a brand new set. The audio on this set is very good, better than my previous set by a mile. Streaming videos with the built in apps is one of my favorite features of this set. Previously I streamed NetFlix with my Blue Ray player. Video quality was constantly being lowered due to streaming problems. I haven't had this problem with this new set. In fact, the HD image I get when streaming is the best I've seen on a Smart TV. I'm assuming its the age of the software on my Blue Ray player that causes that but that's scary since its only a little over a year old.

One annoying problem is that should your WiFi crash, once it is reestablished you have to go into the set up menus and reenter your wireless code. For some reason this set doesn't automatically reconnect to the wireless once the signal is temporarily lost. An annoyance but luckily there is an Ethernet port to allow you to use an Ethernet cable to hook up to your router. So my final opinions on this set? I'd say its a great buy and a worthwhile purchase. I put a caveat in that though - be prepared to deal with the store if you have those strange dark areas that I did. If its any consolation I've read throughout the internet that Sharp is very good about its warranty claims for that issue should you not want to try the fixes yourself. That issue and the tricky video setup hurts this otherwise fabulous set.