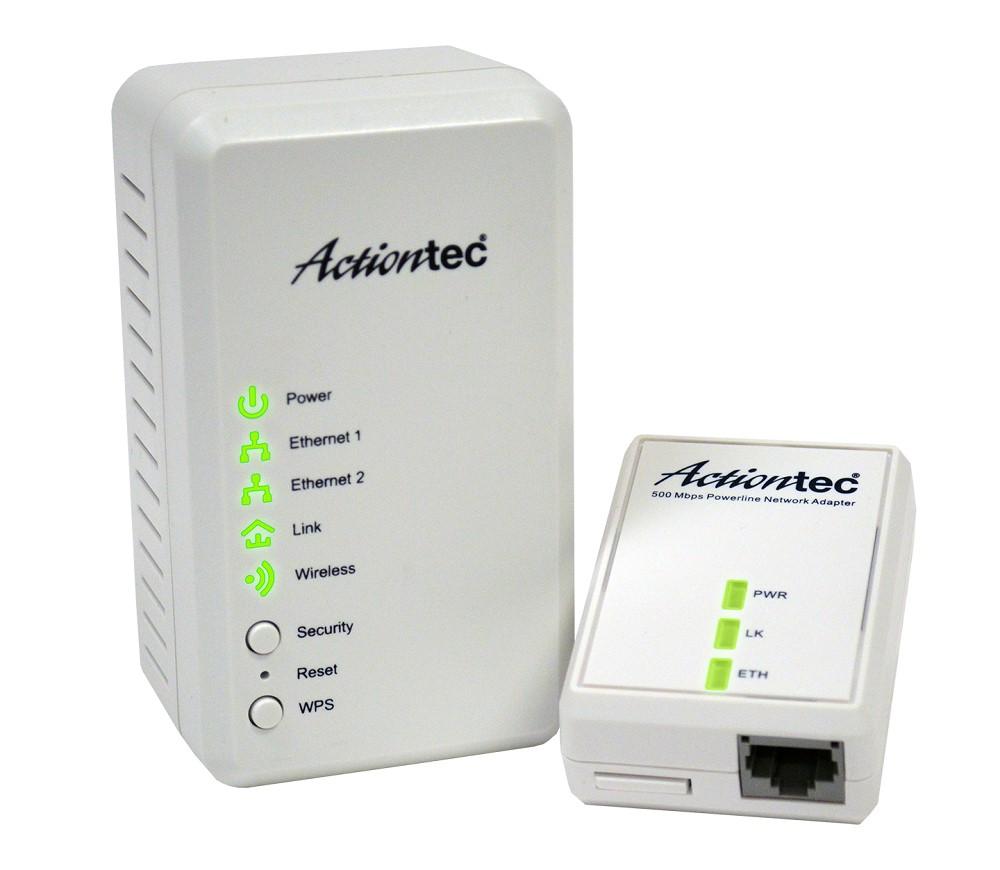 Pros
Love the wireless performance
Ethernet is included which yields better performance
Cons
Not a one
Not too long ago I reviewed a wireless network extender from TP-Link. What was noticeable with that device is that the further the extender got from the base signal the poorer a job it did rebroadcasting the wireless signal. In essence, you have to be close enough to get wireless to be able to boost it. Here's where the Actiontec Pwr51w Wireless Network Extender promises to make some big improvements and add features. Since your home or small office has electrical wiring already in the walls why not use it to move your data between your router and the network extender. Better yet, why not also give the network extender an ability to rebroadcast your wireless signal but also add a couple of Ethernet ports in case you want to add some wiring in a new location.

Out of the box I found a small instruction sheet, a small adapter and a larger one and one Ethernet cable. The smaller adapter plugs into the wall by your router and you'll use the included Ethernet cable to get signal from the router to the adapter. Place the larger adapter wherever you want to extend the wireless signal to or where you want to use those Ethernet ports. Its actually very clever and the setup occurs within your browser but more on that later. Worried that electrical wiring can't carry enough bandwidth? The two adapters included in this kit are rated up to 500 Mbps which exceeds the 100 Mbps of Ethernet wiring.

So at this point we wired everything as explained in the directions and selected a room in the house that has consistent low wireless signal. At this point we had to follow the directions to log into the device from a computer with the enclosed account name and password. This is actually easy to do. Now here's where I'll concur with the directions that naming the new wireless network the same as the existing network is a good idea. Make the pass code the same and now you can move from one area of your house to another without having to jump between wireless signals. Basically you've created a repeater and your cell phone or computer will get great signal wherever you are in the area of the original wireless adapter and the new one. If you don't have a current wireless network then this is a good way to get a wireless network up and running.

Once everything was set up I immediately noticed improved wireless on the other half of my home. Not only that but now I had great wireless outside the home in the front yard too. Your mileage is definitely going to vary depending on the location of the wireless adapter. If its near a window or a large open area you'll see huge gains in performance. If its in a room it probably won't be so huge - but that's exactly where you probably already have a dead spot in your wireless network for that exact reason.

So how did it perform? I already mentioned the big improvement in wireless performance. What I want to point out now is the usefulness of the 10/100 Ethernet incorporated in the Wireless Network Extender. My son is an avid gamer. Normally he uses the wireless network to connect his Xbox which could mean anywhere from 11 Mbps to 300 Mbps of performance depending on the wireless standard he connects with. Sadly those are optimal numbers. His real bandwidth is quite a bit lower even when using the n standard. You'd expect that with a 100 Mbps limit on the Ethernet connector that would hurt his performance. Actually he noticed better load times and less glitches. Goes to show that in some situations a wired connection can still beat the fastest claimed speeds of wireless. Remember, its all about interference and the quality of the signal in your location. Also, the more wireless devices that connect to a wireless network the slower the performance will be so here's another situation where an Ethernet connection may be desirable.

One thing I haven't brought up yet but I'll discuss now is the throughput of this device in comparison to normal wireless extenders. A regular extender 'boosts' your signal, but what they don't tell you is that there is a slower performance in that design. Basically, you connect to the extender and make a request, lets say its a webpage, and then it has to rebroadcast that request to your original wireless network. Immediately you've put a cork in your wireless performance. This is where the Actiontec design is better. Since the signal travels between the two adapters at up to 500 Mbps there is no perceived delay. This probably isn't crucial if your loading a web page but what if you are streaming a movie or downloading a very big file? In practice I've noticed the improvement with wireless performance with this design.

Here are the numbers

So in my home you can see just how slow wireless really is. My neighborhood is saturated with wireless both from close by businesses but also every home and school in the area. In this worst case situation you can see the improvements the Actiontec Pwr51w gave in a previous deadspot that had trouble connecting to the AT&T router.

Calling this equipment a wireless extender is a misnomer with its two Ethernet ports. That said, how does it work as a wireless extender via the power-lines of the home? Every bit as good as a device could work in my worst case scenario. I actually get surprisingly good reception with this wireless network throughout my home so in the end I've decided not to use the stock name and pass code for my AT&T router so that I can split which wireless network devices connect to. Using a wired to router solution actually netted better performance than I could get with the wireless of the original router. Go figure, but I think my neighborhood is saturated with these routers so we have a lot of interference.

Having the ability to use Ethernet dramatically improved my son's online gaming experience. Other Actiontec home wiring devices are compatible with this device according to their FAQ so you can take advantage of Ethernet in other areas of your home or buy more wireless extenders.