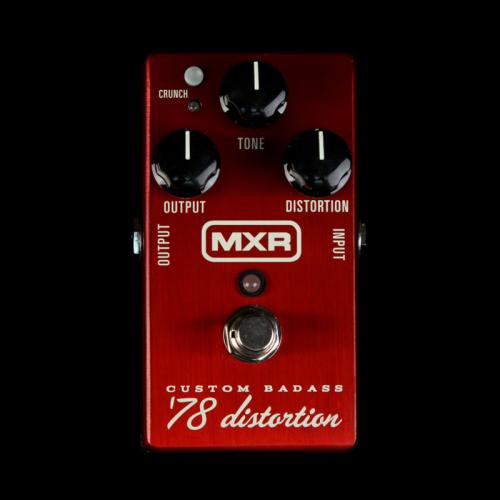 Pros
Beautiful anodized finish
Fantastic tone
Cons
No brown sound
In my endless quest of that just right sound I came across the MXR Custom Badass '78 Distortion. Seemingly, distortion would be the most important word in that product name. But Custom has severe connotations to electronic musicians and well, badass pretty much doesn't need an explanation. What sucked me in was the '78 designation. Why the number? 1978  is the sound of rock changing. Led Zepplin broke up in 1980, Van Halen was releasing a new album, new heavy metal bands like Iron Maiden were hitting the scene, Ozzy Osbourne was prepping a solo career, and so on.

'78 marked the beginning of a few pivotal years in music that drove the 80's before hair metal killed the decade leading us to run to grunge. Of all those examples the release of the Van Halen I album forever changed rock, guitar playing in general, and brought a new tone to us - the 'Brown Sound' so named because Eddie Van Halen said anyone who heard this raw tone could stain their underwear. So 'Custom' and 'Badass'  may draw in the masses but I'm most interested in the '78 moniker. Add to all this that MXR is closely associated with several of Van Halen's effects there is high hope in this pedal for me.

The first thing that grabbed me with this pedal with its beautiful anodized red color. Its not too shiny but really stands out, especially on a pedal board. An anodized finish is much more durable than a painted finish so that's a huge bonus in my mind.

Three knobs cover the top - Output, Tone, and Distortion. Seductively there is also a Crunch button as well as the foot activated button to unleash the noise. Input is on the right of the pedal and output on the left. Pretty standard but one odd placement is the 9v power in on the right side. I have an MXR Phase 90 with this layout and I've had problems with plugging in a 90 degree cable to the right side and not having the power input on the top of the pedal shortens your power lead length to the next pedal. Its a peculiar placement that seems the norm with MXR .

MXR claims this pedal is designed to reproduce classic rock tones and the tones of an over-driven amplifier. That is all very subjective but lets dive in.  Setting the Output knob so there wasn't a huge jump in volume when the pedal is activated forced the sound to be reproduced within the pedal and not by over driving my amplifiers preamp section. I set tone at 12 O'clock which should mean there is no treble cut or bass boost. I set my amp (Quilter Aviator) with the tone knob at 12 o'clock on the clean channel. I slowly added distortion from the pedal. How did it work?

Classic tones are definitely there. Everything from clean chording, a nice crunching power chord rhythm tone, to a outstanding lead tone. Adding the crunch button is very pleasing but this is not the classic British crunch tone. That tone is achieved with compression of the power tubes which is nearly impossible to reproduce in a pedal but the crunch of this pedal is distinctive. Sounds like I really love this pedal right?

Here's where I take issue with the '78 moniker of this pedal. There is no brown sound to be found. You can get close just like throwing water balloons can make you close to a major league pitcher. It sounds great but if you are chasing a brown sound you won't get it with this pedal. Seeing that MXR has a lot of pedals with Mr. Van Halen I can see that unless he endorses a distortion pedal they won't approach that tone. Guess what - Eddie Van Halen abhors distortion pedals. His tone is achieved strictly in his amp so what are the odds of that happening? Sadly if you really want that brown sound on your pedal board you'll have to go to a boutique manufacturer.

What you will get with this pedal are great 'general' rock tones that you can sculpt with your amp or EQ pedal to something unique or maybe you'll hit a specific artist's tone. The tone palette is wide and flexible which is pretty cool - so many pedals are a one trick pony that can't do more than one nice tone change. You can play rhythm guitar, the blues, hard rock all the way to heavy metal with this little champ which is way cooler than any one trick pedal out there.

We have a worthy pedal board addition here. Would I change things? Sure - add a little more anger at the top end or a button with a Germanium diode but for this price you have one very flexible pedal. Its time for MXR to follow industry convention of having the 9v power input on the top of the pedal. Having on the side is a convention that never made sense from day one. I'm going to heartily recommend this one but as I continue my search for the ultimate distortion pedal I'll withhold the Editor's Choice from this one.