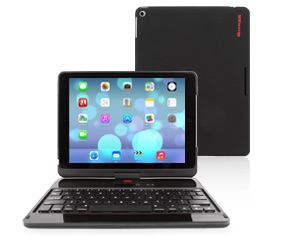 Recently, the company I work for decided to switch all sales reps to an iPad Air in an effort to streamline our business versus the bulky laptops we used to have. My immediate reaction was excitement, but then the stress of trying to find the right accessories started to kick in. I would have to find a case to not only protect the iPad, but one to ensure that my job didn’t become more complicated to perform, and also find a keyboard that wouldn’t be a hindrance since I create Word documents, Excel spreadsheets, and use the internet on a daily basis. Initially, I bought a keyboard that had the spongy silicone keys and typing on that was horrendous. Paired with the non-user friendly keyboard, I had a normal case with a flip stand that would automatically turn the iPad off when I closed the cover, and while that was helpful in preserving my battery, it made using the iPad without having it set on a flat surface nearly impossible. I also didn’t like that the keyboard was not attached to the case, but every case I found that did have an attached Bluetooth keyboard did not swivel and I didn’t want to be forced to have the keyboard out if I was limited on space. Now, keep in mind that I used to use my work computer about 6 hours a day, and I was trying very hard to get used to doing all of my work on my iPad, but I just couldn’t finish my projects as quickly as I used to before. Then, one night, I decided to spend some quality time with Amazon and I came across the Snugg iPad Air 360 Bluetooth Keyboard Case. It was like the clouds parted and the sun shone down on me because this was exactly what I had been waiting to discover!

Level of excitement:  A kid on Christmas morning -

Fast forward $55 paid and two days later (thank goodness for Prime shipping), and a sleek box was waiting for me at my door and inside was my soon-to-be new favorite accessory. I immediately plugged in the keyboard to give it its full charge, as is recommended in the user guide, and within one hour was using my new keyboard and case to send emails. When you first put your iPad Air into the case, you will notice that it is a very snug fit and there is no risk of the device popping out on its own. You will need to sync the Bluetooth keyboard to the iPad by going to Settings > Bluetooth > Other Devices. The keyboard will display as "Bluetooth Keyboard 3.0” and once you select it and enter the 4 digit syncing code, you will be good to go!

What is this, a keyboard for ants? -

The keys are raised just like on a normal keyboard, but they are more cramped due to the smaller size of the iPad Air. It took about thirty minutes to get used to the key spacing, but during that entire time I was impressed that the keys on this case had all the same functions of a laptop keyboard. I can skip songs, adjust screen brightness, and control the volume all with a touch of a button and can avoid touching the screen as much as possible. The screen swivels 360 degrees so by simply sliding the keyboard power button to off, I can swivel the screen around and lay it flat on the keyboard without worrying about accidentally pushing any buttons. This feature is exceptionally helpful if I need to just create a quick note, reference an already completed document, or read an article online. Also included with the keyboard is a stylus pen that slides into the upper left corner of the keyboard. My stylus pen doesn’t lock into place, so if the iPad is tilted in my bag, it will slide out. As someone who uses the stylus often to avoid touching the screen, I surprisingly haven’t found this to be a major issue because I usually just end up leaving the stylus in my pen pouch. Another great feature I discovered after about a week of use is if the keyboard is on and your screen auto locks (mine is set to auto lock after two minutes), you can press any key on the keyboard for the lock screen to display, and enter your passcode directly on the keyboard instead of having to touch the device screen. Are you starting to make the connection that I want to avoid touch the iPad screen as much as possible? I have found that when the screen is angled at more than 50 degrees, any touch will cause it to tilt back and potentially fall over. The iPad is heavier than the keyboard so the weight is not evenly distributed, but I do not view this as a deal breaker because I like how light the case is. Yes, they could have made it heavier so that the weight was better distributed, but as someone who has to carry this device around every day, I prefer the lightness and slimness of a 1.5 pound case and will gladly deal with the screen angle.

Now let’s talk about the protection this case offers. I have not dropped this (yet) and I am not sure that I ever will since I never dropped my laptop before and this feels like a smaller version of my laptop. In the chance I did drop the iPad, though, I do feel like my device will be protected by the snug silicone outer layer. The part of the case that the device snaps into is thick and sturdy, but not as thick as a heavy duty Otterbox style case is. A drop of a couple feet would protect your iPad, so I wasn't worried about completely annihilating the device, but I was worried that the screen might still crack as there is no real protection for that if you happen to drop it while your case is open. To put my mind at ease, I purchased a BLUBOON Tempered Glass Screen Protector. It was extremely easy to apply, but you only get one shot at it so if you don’t feel like you can apply it properly the first time around, take it to your friendly neighborhood tech shop and pay the small fee for them to apply it for you. Aesthetically, the case is very slim and attractive. The silicone will show any dust or grease very easily, the latter of which I learned when eating a slice of pizza and then closing the case to put in my bag. A quick wipedown removed all evidence of my unhealthy eating habits, but I still somehow manage to get makeup on it throughout the day. I’ve given up trying to keep it looking pristine and am considering putting a couple stickers on it to draw attention away from the makeup smudges that I can’t seem to avoid getting on it. The non-slip grips on the bottom of the case are small which is perfect to keep this case feeling slim; however, I have found that if the surface that I have it on is especially slick, think like an office desk, the iPad will slide around pretty easily. I resolved this small inconvenience by setting it on a magazine or my agenda.

Time to answer all the other questions you may have -

The keyboard comes with a micro USB cord but not a wall outlet plug, however lately I have just been using my micro USB Samsung Note 3 phone charger because it is longer and I am usually charging the keyboard at the same time as charging the actual iPad itself. The lithium ion battery lasts for 40 hours so I only have to recharge it once a week. If you take your iPad out of the case, you can still use the keyboard from up to 32 feet away, but even with my glasses on, I can’t see the screen well enough to type from 10 feet away so I don’t know how this could be a useful feature for anyone. They do make this case for all iPad models, including the newer iPad Air 2, and I will probably be buying one for my personal iPad Mini. There is a lifetime warranty on the device, and I received an email instructing me how to register for this about a week after delivery. This case has been working so well for me, that seven of my coworkers have also purchased it and are loving it just as much as I do!

Overall, I am extremely pleased with my Snugg iPad Air 360 Keyboard Case. It is perfect for day to day heavy use and has held up extremely well for the past month and is not showing any signs of wear and tear. Trust me when I say that this case was made for the working professional in all of us! 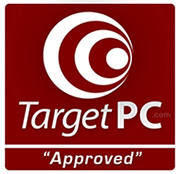