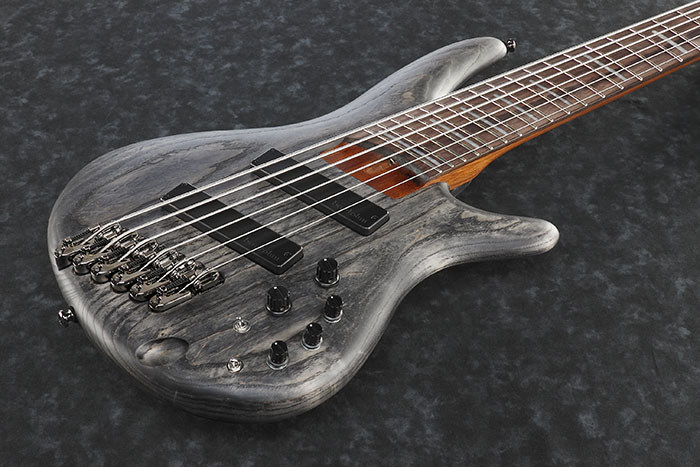 Pros
Beautiful Finish
Great electronics package
Perhaps the best bass bridge available
Fanned frets and a thin neck make this comfortable
Cons
The super thin neck can back bend if string tension is lowered
Tuners just seem like they came off a cheap guitar
Kicking off our first ever guitar review we actually have a bass. Normally I'm a guitar player but when the need arises I can pickup a bass.

Today we are looking at the Ibanez SRFF806 - one of the latest additions to Ibanez's SR line. If you haven't yet take a quick look at the pictures. What immediately jumps out are the fanned frets and six strings. Just looking at this bass it can be rather intimidating.  Jumping a little further this guitar features perhaps the larges number of knobs and switches I've seen in a long time. Two switches and five knobs promises the ability to define your sound.

This bass is surprisingly light for its size. Not light like many guitars but if you like the weight of a traditional Les Paul this guitar is right up that alley. One complaint I have of many five and six string guitars is that the traditional woods used in their construction greatly increase the weight of the guitar once a wider body is needed to hold a wider neck. The width of this neck is quite comfortable although it can be a stretch to jump strings between notes. This is where the fanned frets come in to help. The concept is that the fanned frets allow your hands to stay in a more comfortable position as you move around the neck.

The woods in this guitar are absolutely stunning. The black stain finish does wonderful justice to the ash body while the Jatoba/Bubinga neck is something to really behold. Ibanez chose to leave the wood unsealed, which while it does affect the smoothness of the finish, is absolutely a good idea with this particular stain finish.

What's going in with this bass?

The particular bass that I got my hands on actually came to me for repairs. The owner complained of buzzes all over the fretboard. One quick look told me that the guitar had developed a backward bend in the neck. This lowered the action but also meant it needed some major adjustment. So why did this happen? The owner down tunes and rather tune from E to E on the six strings he sets up his guitar as Double Low A, B, E, A, D, and G. The highest pitched strings will be familiar to bassists everywhere but the low B and A are unbelievably low. Double low A comes in at an incredible 27.5 Hz. The lower limit of human hearing is around 20 Hz. Down tuning to this extreme meant that there was much less sting tension than normal. Sadly the tension of the truss rod pulled the neck into that back bend and I was surprised by how much of a bend had happened. Note to the wise: if you will downtune progress slowly. A sudden loss of tension can be catastrophic, especially with a neck whose truss rod seems to have a tremendous amount of tension. To fix this I had to slowly increase the tension of the stings while simultaneously mounting the neck in a jig that let my pull on several areas on the length of the neck. As I increased string tension the neck slowly returned to straight with the only casualty being an A string. After two weeks of careful adjustment I was able to return the neck to dead flat and I couldn't achieve the positive neck bend I normally like to setup with. I was practically out of threads on the truss rod at this low tension so any more and I'd create issues on the other end. I found I had a lot of sting rattle between the nut and tuners - I devised a wide rubber band would help and it did.

Having done this work I have two complaints. I understand two truss rods wouldn't work as this neck is so thin to create a second truss rod channel would leave very little wood to resist string tension. Knowing this and that five and six string users often will downtune the truss rod is barely able to accommodate this change in string tension. Also, the truss rod is adjusted at the body end. I'm not a fan of this layout which Fender guitars are known for. It's trickier to get the Allen wrench in and the presence of the strings means I can only move the truss rod a very small amount. Granted, small adjustments are better but when you're trying to move a neck as much as I was this was very frustrating. I put masking tape in the body's opening for the truss rod to make sure I didn't damage the finish.

My second gripe is that the tuners don't have a hole drilled in them to pass the string through but a hole at the top of the post to push a string down into. This makes inserting the string then turning the post to pull the sting down onto the post surface a lot more tricky. This design works well with guitars but on a bass its pretty tough. Its probably due to the very smooth finish of the metal - the stings just can't bite as they try to bend around this post. This design also doesn't allow the locking of a string on itself. With low bass string tensions that doesn't matter but some customers of mine prefer a sting locked on itself. To each there own but the design of this tuner will not allow for fast string changes when they are needed. This would be enough for me to swap these tuners out but now we come to their real Achilles heel: They aren't geared high enough. A tiny amount of movement makes a huge shift in pitch. It's easy to go from flat and overshoot way into the sharp area of any tuner. Loosen up and now you are flat again. Getting the proper pitch is a lot trickier than it should be. Add that I intoned this guitar and I was doing a ton of tuning so after about an hour I was fed up with these tuners. Buyer beware: plan on buying a set of good tuners with the purchase of this guitar.

Keep in mind that I had to wait two weeks to play this bass until I had corrected the neck bend. A beautiful instrument like this just calls you to play it but all the anticipation was well worth it. Before we cover the actual tone let's look at the tone controls. 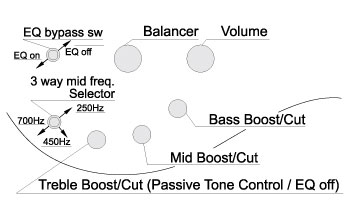 We have a traditional volume knob but in place we have a balancer knob - this lets you decide how much of the front or rear pickup is used. What really stands out is that this instrument features Bass, midrange, and treble boost/cut knobs. You can really dial in a tone in that way. Don't like the way the midrange sounds? Plenty of options for changes plus you can go passive or active on the preamp with the passive Bartolini pickups. Did I mention these are great pickups? Here's some curves to give you an idea what the different tone options can do: 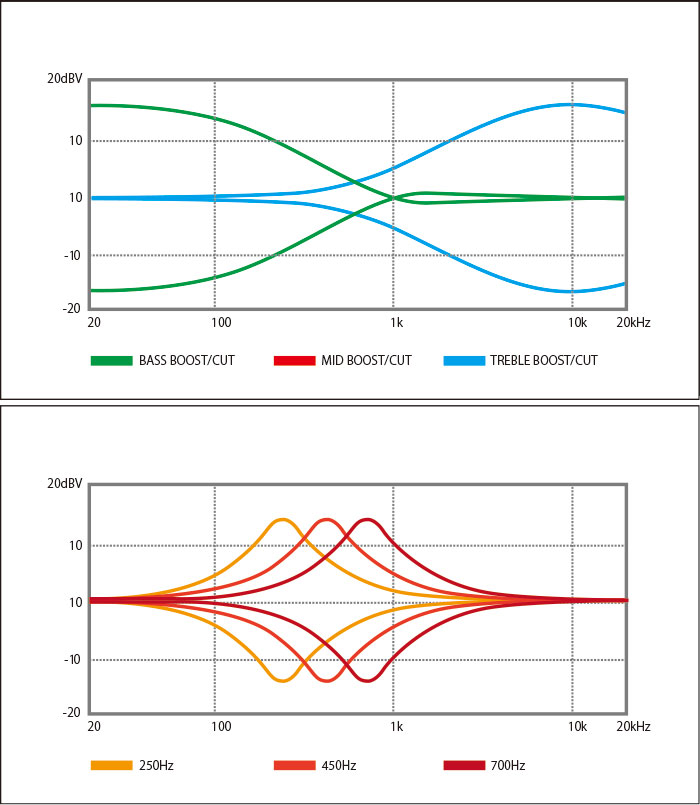 Notice that the midrange is in the bottom graph. This arrangement let's you select not only cut or boost for a specific frequency (selected with the second switch below the preamp switch), but also allows for a nice curve. Listening makes for some distinct changes. Boost the mid up all the way then play with that selector switch and you get a real idea what this arrangement is capable of. A bass isn't a midrange instrument but this can really affect how tight or loose your sound is.

One of the coolest features of this bass is its bridge. The mono-rail V bridge allows for each saddle to be separate, which means vibrations from one string aren't transmitted to the next string. It looks slick and works great. Intonation with this bridge was a snap - except for the aforementioned problems I had with the tuners.

Package a great bridge, beautiful tone woods known for the hardness which produces a tight sound, and a great electronics package you'd be well on your way to a great bass. Add the fanned frets and the great finish and you arrive at a very attractive bass. Including a nice Bartolini pickup set with that great preamp makes it so easy to dial in a tone but these tone woods are geared towards a tighter sound so don't expect a fat loose sound without some work.

I'd have nothing but great things to say about this guitar if it wasn't for the tuners and truss rod. Granted, truss rods aren't something you don't adjust everyday, but when you need to it makes all the difference in the world. Let's get to the hairy point in this review which was the backwards bending neck. A five piece Jatoba and Bubinga neck should be plenty hard but this neck is so thin it can still give. Thin design leads to great comfort which complements the fanned frets, but something has to be done about this truss rod design. A second truss rod could help, but at this thin of a neck  I wouldn't want to have to route in another channel. If you downtune from the factory tuning you are inviting a neck adjustment and further problems down the road. Bubinga isn't on this guitar because its nice to have a very hard wood on the neck but because its necessary. Take ash or maple and make it this thin and ask it to resist the tension of six bass strings and you'll have failure. No one wants a thicker neck so a better truss rod design needs to be figured out. As it stands the factory setup is barely capable of working. Add thicker strings and we're back to neck movement. An 805 with five strings will probably have far fewer problems than this 806.

All that said, keep it in factory tuning and really the only thing I'd change are the tuners. Everything else is very pleasing in this package. The comfort of this guitar is wonderful. The body fits nicely against you, the weight is centered and doesn't pull the headstock down, and the fanned fret/thin neck design can't be beat in a six string design. Here's a video of an 805 which is the five string version of this SR guitar.