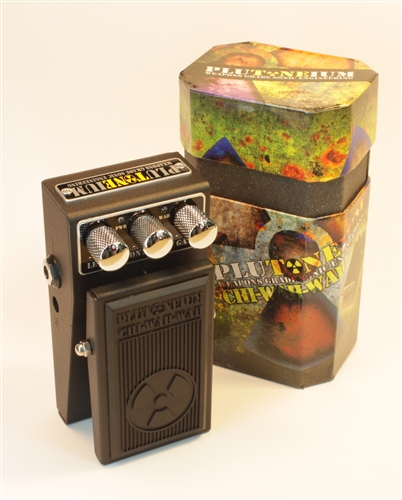 Pros
Rugged design
Reliability via optical sensor
Wild sounds
Finally a compact wah with great sound
Cons
Not a one
Most people's first effect pedal is usually a distortion pedal. What comes next? For most of us its a wah wah pedal. The wah pedal isn't just for 60's rock and roll sounds. Ask guys like Steve Vai and Kirk Hammett why they spend so much time getting their wah technique down. Better yet, search the internet to see how many musicians custom design a wah and endorse it. Obviously there are many different tastes in wah sound as well as design. Normally the pedals are large so that your whole foot rocks the treadle back and forth. Here's where today's product breaks with convention. I give you the Plutoneium Chi-Wah-Wah. Naming a pedal after a tiny dog suddenly makes sense when you see the actual size of the pedal.

The pedal is packed in an attractive box. Inside are the pedal and its instruction book. Pretty simple stuff but I pulled the pedal from the box I was blown away by its construction. This thing is heavy - almost twice as heavy as a standard pedal. The metal construction is truly nice - this isn't cast pot metal but bent steel plate. Very nice. To access the battery compartment on the bottom you need an Allen wrench to remove four Allen bolts. Beefy and much better than having a plastic bottom like most pedals. Since I use a board I was going to use external power anyway but the unit comes shipped with a 9v battery already inside.

The Chi-Wah-Wah is made to fit in a standard pedal slot. It's no bigger than a distortion, overdrive, or other standard size pedal. Already this is something I really like. Previously I've used a Steve Vai Bad Horsie which is about the biggest pedal known to man - almost twice as wide as the most popular competitor. What I like about that pedal is its solid medal construction and optical sensor built into the effect. The Chi-Wah-Wah also features medal construction and an optical sensor. For anyone whose used an optical sensor equipped wah you already know its advantages - more rugged, less chance of dirt and lint jamming up the movement of the pedal, etc. What lacks on most wah pedals though is the lack of adjustability. Most have a simple control that adjusts what is known as 'Q' - which is the contour of the pedal. This is where looking at the Chi-Wah-Wah reveals some nice advancements. Level, Contour, and Gain controls are provided.

The treadle is spring loaded so once you release the pedal it will self rise and turn off the effect. I like this. Some pedals require you to use your foot to lower and raise the treadle - which would be like the gas pedal on your car staying down when you took your foot off of it to operate the brakes. Some people like this and guys like Frank Zappa were able to use that to great effect but I want the wah to wah - not shear the sound constantly in place of a distortion pedal or other effect pedal. Attached to the treadle is a small piece of material that enters into the body of the wah - as the treadle moves up and down the perforation in this piece breaks the optical signal thus activating the effect. Something like your garage door opener safety sensors. This is awesome - without moving parts to operate the effect there are no parts to replace down the road. I've replaced the pots on a few wah pedals and it isn't hard but why do this when you don't have to? A green LED lets you know you have power to the pedal when you plug in your input cable. As you depress the treadle a red LED will light letting you know you are activating the effect. Nice - and handy in the dark.

Ok we've gone over its great design but a pretty pedal does no good if it doesn't sound good. The first thing to strike me was how quiet this pedal is. Plug in the cables and you hear nothing - this is a true bypass circuit but even when I depressed the pedal there was no hiss or hum added to the sound. This is an amazingly quiet pedal. Drop a bunch of noisy pedals on your board and connect them and the noise hitting your amplifier will drive you nuts. THD (total harmonic distortion) is extremely low on this pedal. Remember, an amplifier amplifies whatever signal is input to it - including hiss, hum, and other noises. Ideally you shouldn't need a noise suppressor pedal to control THD - and with quality pedals this is fully possible.

In order to see the possibilities I plugged the pedal by itself between my guitar and amp. I didn't want any other pedals to color the wah effect. I didn't mess with the knobs out of the box. The first time I depressed it I got a very satisfying sound - very vocal. Once I consulted the manual the knobs were at the setting known as 'Vocal Wah'. I kept depressing it and you could actually hear the word wah coming from the pedal. Nice. Back to the meat of it though - at this setting I found the pedal perfect for soloing. It wasn't a heavy 60's wah sound but it was very pleasing. Very modern yet not something I wouldn't play a broad spectrum of music with. Like Vai and Satriani's use of wah pedal? This setting is a good starting point. Tweak it from there and you'll find their sounds very easily.

Next I tried the 'Crying Wah' setting from the manual which is 12 o'clock on all the knobs (the knobs as turned will feel a bump at 12 o'clock in case you are somewhere dark) and wow what a classic sound. I'm right in Cream and Jimi Hendrix territory now. I love this classic sound. To be able to go from modern to classic with small pedal adjustments just blew me away. Often other pedals require lots of tweaking and even switches to engage different sounds. All this is had with simple gain and 'Q' adjustment with this pedal. As the pedal can be depressed less than all way down you can get some nice varied wah sounds.

Lastly I tried the 'Screaming Wah' settings and this is completely over the top. This is wah in your face sound with absolutely no subtlety. Contour and gain are maxed and level is at about one o'clock. It's actually a fun setting. If the majority of your solo has no effect this makes for that nice little add on to wow the audience. Mind you that there are several adjustments you can make between each of these sounds but as a starting point they really show off this pedal's versatility. This isn't a one trick pony like other wahs I've tried. This pedal can pretty much do whatever you need it to. I think the Plutoneium guys have hit the nail on the head with the sound of this pedal.

This thing is hitting it out of the ballpark good. Right size. Right sounds. Fantastic construction. Quiet as could be. It goes on and on. I can't tell you how nice it is to fit this on a pedal board and free up lots of space. In my conclusions I usually remark how I would change things but I can't find anything on this pedal that isn't done the way I would want it if I were the designer. They even offer a limited edition copper colored version if gunmetal gray isn't your thing. How about an available bass Chi-Wah-Wah? Yup - they've got it. Having the word tone square in the middle of the Plutoneium brand name isn't marketing - its the real deal folks. Pop a distortion pedal in front of this and you get fantastic effects. Use it solo and it is one of the best wah sounds I've ever heard. This is a hand wired boutique pedal that doesn't let you down after the hype. How nice is that?

My only downside is that I have to send this fantastic pedal back. I find that my other wah pedals just don't stack up compared to this lovely little pedal. I wouldn't hesitate to tell anyone who needs a better wah solution to look at this unit.