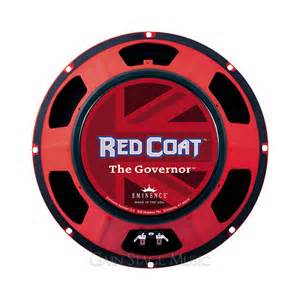 Pros
Very close to the V30 sound
Great build quality
Cons
If you want speaker breakup this is a great choice - no cons
Eminence has two distinct speaker lines directed at musicians who want the 'British sound' or 'American sound'. The British sound is the sound we like from rock bands of the 60's and 70's who needed a deeper sound with speaker breakup. Lots of bass and mids usually at the cost of highs are the character of these speakers.  American sound enthusiasts are generally looking for a more structured sound - tighter bass and more mids and highs. I had the opportunity to buy a speaker cabinet with two Eminence 'The Governor' speakers already installed. I jumped at this as audio files I've heard online make me think this speaker is similar in quality to the Celestion V30 which was so loved by artists from the 60's all the way to Eddie Van Halen.

The first thing that struck me was the nice red paint job on the spider and cover on the magnet. The cover is the Union Jack in the background version. Early versions had the older style red label but this new label is flashy. One thing mysteriously missing is the ratings of the speaker anywhere on it. Generally there is a small sticker to let you know the impedence and power handling.

This is a heavy speaker which means this is an older iron magnet design in my mind. I like that. Newer magnet materials often give great specification sheets but just don't sound as good. What really intrigued me is that this speaker is rated at 102 dB of sensitivity at 8 ohms. That is an unbelievably high efficiency rating. I would expect a speaker designed for speaker cone breakup to have a rating more in line with 97 dB.

Here's how Eminence describes this speaker:

Nice tight low end, smooth midrange, and top end sparkle is not how this speaker is generally described in most catalogs. What drew me to this speaker is that it was described as having a big bottom end with speaker breakup when really pushed, great mids, and that speaker break up adds to the top end. That sounds a lot like my beloved V30 design.

First I used a 30 watt tube amp with EL84 tubes. I've modded this amp with an extra circuit in the clean channel for more gain and removed two tubes so that it is running at 16 watts. This lets me get way up in the volume knob and really get that classic EL84 tube compression. Also remember that I left this setup as an open cab design. That can hurt projection and bass but more on that later.

With nothing but clean output and no extra gain stage it was staggeringly good sound from this speaker. Many speakers are just too tight and this robs the bass and mids. If you like classic Fender sparkle in the top end this speaker can deliver that. The mids on this design are fantastic - which is probably its most important quality considering guitars are a mid level instrument. With the clean setting the bass is smooth but not boomy. Even at the amp's cleanest setting it was never too bright. I added the extra gain stage and immediately got some breakup on the bass and mids. Very nice southern rock sound. I kicked in my extra circuit and wow I was loving this classic rock sound. Getting so much from a speaker on a clean channel is amazing. Next I switched to my gain channel. As I moved the gain up I noticed the bass and mids really began to come out. The high end stayed and playing high notes on the guitar suddenly didn't sound tinny at all. I think describing this speaker as having a tight low end as Eminence did really robs it of its true character. Speaker breakup is very evident in the bass and mids and that is exactly what I wanted - something that approximated that classic V30 sound. Even with this low wattage amp anything above about 3 on the volume meant greater than bedroom level volume. Eminence wasn't kidding about their efficiency rating on this speaker.

Next I brought up the Bogner Line6 100 watt head. This one has fresh tubes and the latest firmware (who ever thought I'd say that about an amp?). Anything but just off zero on the speaker gave tremendous volume. That's where having such a high efficiency rating is really noticed. I tried everything from clean all the way to this amp's dirtiest settings and was very impressed. Sitting about 6 feet in front of this cabinet I could feel the air pushing from it. Coupling the open design and this speaker yielded very surprising results. I closed off the cabinet and found that the bass and projection were just unbelievable. This is a fantastic rock oriented speaker. Here's the surprising part - that top end sparkle makes this a pretty nice choice for jazz. Roll back your treble on the guitar, get a nice clean setting on the amp and you're in business. That's very versatile. The frequency response for this particular speaker is surprisingly flat which allows for a lot of changes in sound to be done with the instrument or with the amp head.

I really like this sound. It doesn't have as much speaker breakup as the Celestion V30 but the mids and top end are very clear. Did I want more breakup? I found I could get a nice rock/southern rock tone. Getting high on the gain I found it to be a smoother tone - not that abrasive sharpness so many speakers suffer from. This is an all around good speaker that can do many things and it does it very well.

The super high efficiency rating means this speaker is very loud even at lower settings. It's rated at 75 watts but a cabinet full of these would be something to contend with. I tried both an open and closed cab design and had great results both ways. Some speakers are too loose sounding or very tight and brittle - this speaker is somewhere in the middle with  the better qualities of the other tones.

Would I change anything? If you want more mids and highs Eminence makes the Wizard for that exact purpose in this lineup. There are also the Patriot line which are supposed to approximate the American sound. I hope to test some of those soon. At $100 a speaker its a big investment but this one is well worth it. I have other Eminence speakers that are over 20 years old that are still on their original cones so that says a lot about Eminence and their build quality. Sound is very subjective so I'd recommend you go to an Eminence dealer and listen to the speakers side by side with your own amp. Overall this speaker is impressive. Amazing efficiency coupled with a great sound are its calling card.