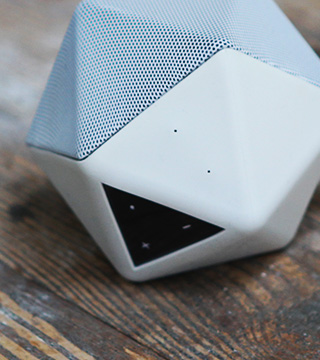 Pros
Crisp clean sound even at max volume
Fantastic microphone
Bluetooth portability
Features can be updated
Cons
None
One of the most interesting products I've come across recently is the Binauric Boom Boom speaker. While we have become accustomed to smart TV's and smart phones we now have the arrival of the smart speaker. The geodesic design promises full spectrum sound with the ability to record from more than one mic which allows a surround experience with noise cancelling technology. To me, the most interesting aspect of the Boom Boom is its ability to add new features without changing the hardware through software updates. Originally there was support for one Boom Boom connected via Bluetooth but the next version of the software on the speaker allowed two to be hooked up for increased stereo separation. A single Boom Boom has two speakers plus a small bass speaker so stereo via one Boom Boom is possible but true stereo separation requires more space between the left and right speaker (or should but more on that later). The latest update now supports the surround recording feature which makes this very useful for a variety of recording situations - everything from a conference call, software like Skype, all the way to recording conversations in a room.

Upon opening the cardboard box the unit was shipped in I was struck by the packaging the Boom Boom comes in. A very slick box contains the speaker, a USB charge cable, and a 1/8" stereo cable. The unit provided to me was brown but white and gray also available. I was shipped one speaker so I can't test stereo separation via dual Boom Boom speakers but we'll discuss audio quality with one Boom Boom in just a bit. One slick design element is that both the USB charge cord and the 1/8" cable are flat and heavily insulated. The speaker itself is heavy and the metal grill that protects the speakers is really strong.

Step one of using a Boom Boom is turning the unit on and turning Bluetooth on your phone or tablet. Immediately the Boom Boom was found and installed. To install onto another device keep your finger over the green LED and it will let go of its last device and become visible to new ones. Pretty simple - and in all actuality the main and only button is the power switch. There are two 1/8 plugs on the unit. To use the Boom Boom as a speaker you can plug into a device with the provided 1/8" cable. More interestingly is that it doesn't matter which one you plug into. Should you choose to use two Boom Booms for stereo separation you can plug the two speakers to each other with the 1/8" cable.

Step two is downloading the app. This isn't absolutely necessary if you never plan to update the Boom Boom speaker but an absolute necessity if you want to take advantage of future updates. Immediately after installing the app on my iPhone I was prompted to update which now enabled the dual speaker feature. A few days later another update was available. The user interface with the updated app is slightly different but in no way difficult to use.

Did I mention that the speaker has an internal battery? Not having it tethered to an outlet or power supply is awesome. One thing that makes Binauric's Boom Boom unusual is that it features two tweeters and one woofer. That's how you can achieve stereo sound with one speaker although the two tweeters being right next to each other wouldn't normally allow stereo separation - except that the geodesic shape of the speaker has those speakers pointed out in different directions. This allows for the sounds to not only separate into left and right but also take advantage of natural reverb in a room. Obviously separating the two channels with a second Boom Boom would be more ideal but I'm going to discuss what one Boom Boom speaker sounds like.

The room I played it in is about 20x20 feet with an average nine foot ceiling. Such a square room normally won't lend itself to great sound - but even worse is that there is ceramic tile floors, one wall of windows, and the opposite wall of the windows has wooden cabinets. If there is a "hard" room that hurts sound this is it. I placed the Boom Boom in the center of the room on a table that locates it approx two feet off the floor. I set my iPhone to start playing random songs - I have everything from Sinatra to Iron Maiden and just about anything in between. As you adjust the volume on your device you are actually controlling the output of the speaker. At max volume the speaker is crystal clear. Surprisingly clear. Whats also very surprising is how good the stereo separation is from one Boom Boom. The left and right channels are aimed to different walls and bounce back towards the center of the room naturally.

The sound of this speaker is tight and clear. This would actually make a great studio monitor speaker as it doesn't favor treble, mids, or bass but produces all three very well with no perceivable distortion even at max volume. I tried lots of different artists and songs and I couldn't find one that didn't sound good as long as the iPhone's jazz and rock settings were used. Those settings bring up the bass without cutting mids and treble. Bass boost on the iPhone is one of the worst presets I've ever heard and true to form didn't sound good on this speaker. The Boom Boom is not a ported design so users shouldn't expect bass that you can feel or that thick bass tone that some speakers can produce. That isn't the Boom Boom's intention and should by no means be held against it. The quality of the speakers is very good. Not a bit of distortion at max volume is something very impressive especially when that volume really fills a room.

The Boom Boom as a microphone

Two of the Boom Boom's most interesting features are its surround recording and noise cancelling ability. This leads to one of its main intended uses which is conference calls and using the Boom Boom for personal recording. Next to the touch sensitive panel for volume and Bluetooth management are the mic openings. Due to multiple mics the Boom Boom is able to record in what Binauric calls 3D. Having put mics on drum sets and instruments before this I was dubious as to how good these small mics could record.

I made a conference call to my daughter without telling her what I was up to. She immediately mentioned how much clearer I sounded. I walked around the room and she had no problem hearing me clearly. As an aside, once I explained what I was doing my daughter wants to get a Boom Boom for her work.

The Binauric Boom Boom delivers in spades on all its promises. Its a great speaker that requires no cables to your device and doesn't leave you tied to a power outlet. Its got an even better microphone which makes it useful for the office as well as home.

The best feature of the Boom Boom is its ability to be updated with new features. So far they've added 3D audio recording as well as allowing two Boom Booms to be connected together. What else can they add? I'm curious as they've shown this to be a thoroughly well thought out product. This is the first "smart" speaker we've encountered but well worth consideration.,