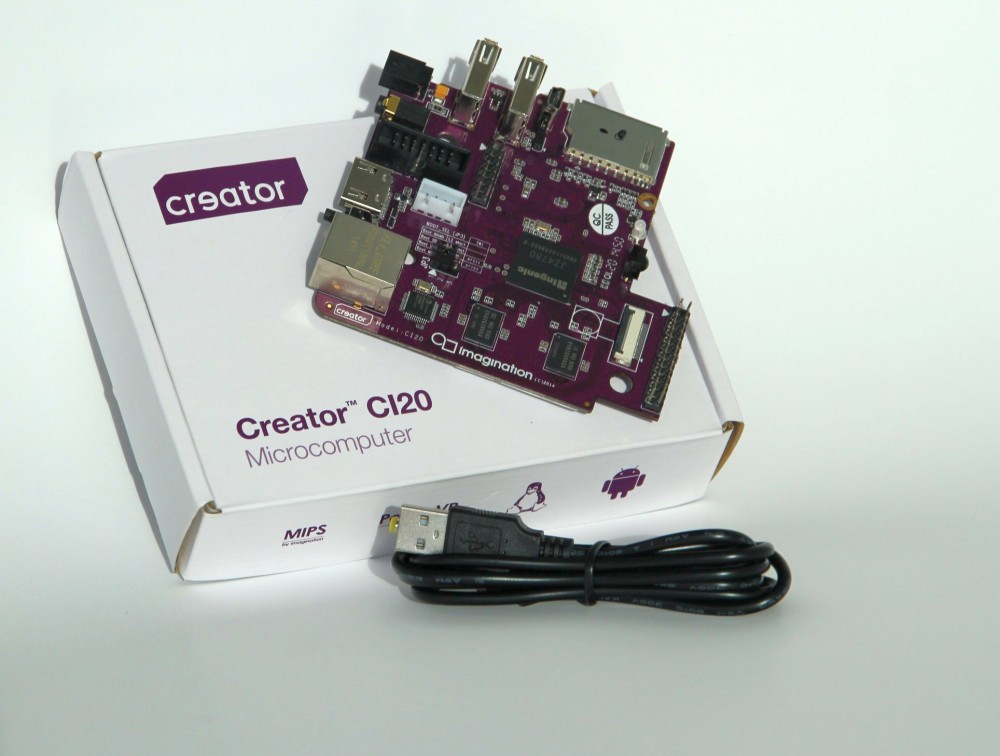 Pros
Good performance
Lots of value in a small package

Cons
Its a hobby board. You'll have a lot of fun learning with it
Microcomputers literally surround us. They are in our tablets, phones, and even watches. What isn't readily apparent is that so many of those systems are locked in. You can write software for them but are limited by what the manufacturer allows you to do. You can link it to hardware, but in the case of many devices, only hardware that has been approved by the manufacturer can be used. You get my point. What I was interested in playing with was equipment that could let me develop software or incorporate with other projects with the freedom to decide how I wanted to develop.

A little over a month ago it was serendipity that I received an email about the Imagination Creator CI20 Microcomputer. Whats often lacking in microcomputers is processing power but the CI20 comes packed with a dual core processor, a real GPU, 8 GB of memory, and an SD card slot which helps with software installation as well as expanding available memory.

When I opened the box I was blown away by how small this unit is. The board is approx 3.75 inches by 3.75 inches. That's a nice small layout that should work quite well with most projects. Scroll to the bottom of the page and look at the gallery pics. You'll notice my pictures feature a green PCB while the final product is purple. My pre-release board also featured 4 GB of memory instead of the 8 GB the production units are shipping with. Remember one key concept was freedom? The CI20 works with Debian 7 Linux or Android 4.4 KitKat. If you decide you don't like the OS you've been working with or you make a sudden change in your project there are easy instructions to install the other OS available at their site.

Included in the packaging were a wall wart power supply with adapters for different markets. Better yet, should you develop something based on this board feel free to use it around the world as you already have the different power plugs you'll need as you travel. I chose Android as my OS as there are so many fun projects I'm coming across are Android based. At this point I have to mention that you'll need a USB keyboard and mouse. I happen to have a wireless mouse and keyboard which meant for my HDMI video I could use a big television and sit in comfort on my couch while I worked. Realistically most new monitors have HDMI but a TV works just as well and the CI20 can give you up to 60 FPS 1080p video.

Setup is as easy as plugging in the power supply, a keyboard, and a mouse. If you are going to use Ethernet plug that in too. After startup you'll be greeted by a desktop that will look familiar to Android tablet users. Even included on the initial screen is a unlock feature which would be activated by sliding your finger on the screen of a tablet. Remember, this OS was designed for tablet and phone users but there is no reason why you can't make all the changes you like to it to customize to this hardware.

Included on the desktop were three bench marking apps. The board sailed through those without difficulty. The video quality on a television is very crisp and the colors look fantastic. Also included were a couple of games which worked flawlessly. This is all fantastic because hobby boards often scrimp on video or rendering but none of that is evident with the  Creator CI20. YouTube videos stream well but some enbedded videos at news website didn't work well for me initially. I was sure this was a software problem  and not indicative of the hardware at all. I was able to download software components and fix all these issues. Often with an OpenOS you have to play with settings and find the right software components to make things work but that's a big part of the learning curve.

Getting to the aspects of this board that make it desirable to a hobbyist here is a link included to elinux wiki which gives the board layout and several specs. There are many ways to interface with this board and the approach is well laid out here.

The sky is pretty much the limit with the CI20. I see a whole lot of potential for app and software developers. The board I worked with only had 4 GB of memory so 8 GB should help with a lot of larger memory intensive software. Even at 4 GB the performance was impressive and only massive video files caused slow downs. As the operating systems for this particular board mature there should be a few performance improvements available but as it stands everything on it works straight out of the box. Perhaps you'd like to make a large touchscreen computer? Or how about a kiosk setup? I found that I was able to put it on the back of an older television that didn't have smart apps and gain a lot of functionality while also giving me a comfortable place to work. At $65 there is tremendous value in this unit. Future generations of these ideas should have some leaps in performance if you think dual 1.2 GHz processors are too slow but admittedly I was surprised just how much I could do with these.