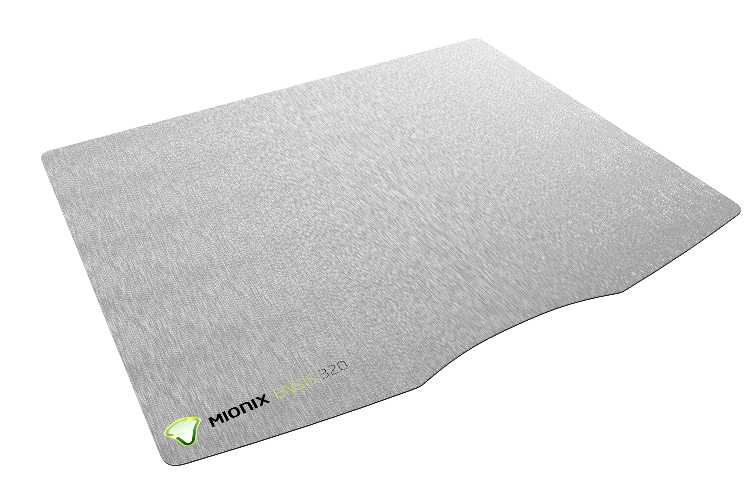 Pros
The biggest jump forward for mouse pads
Cons
Somewhat pricey
Recently we reviewed the Mionix 8200 Mouse. Mionix was kind enough to also send their Ensis 320 Mousepad at the same time. At first a mouse pad may seem like a throwback but after using this unit I was surprised how well it works with gaming and everyday work.

Lets set the way back machine to about 20 years ago. Mice had 2 buttons, were shaped like a kidney bean, and used a rubber ball that moved potentiometers built into the chassis of the mouse. Wireless mice freed us from having a wire (which really isn't all that big of a deal) but more importantly, LED and laser technology allowed mice to track more accurately. Mice soon not only had optical features, but as games on computers became more sophisticated, more buttons! This was the revolution that let some gamers really advance their skills. I remember programming the ability to jump on one of the buttons. Suddenly I could dive out of the way of my opponents shots. Add a scroll wheel to rapidly select weapons and you had a huge advantage over other players.

Enter mouse pads  My first mouse pad was the typical foam with rubber bottom thing that had the logo of some company. This was the typical pad that came with your new computer or was thrown in with the purchase of something else. The problem with these pads was that they collected dirt and as they deteriorated they tended to contribute to all the crud that built up on the bottom of the mouse. Our first gaming mouse pads were made of high density plastics similar to cutting boards you use in your kitchen. The rough texture let mice with balls still work while lasers like the uniform surface (albeit rough).

The Ensis 320 looks like no mouse pad I've seen before. It is built from a 1mm aluminum alloy sheet with a nice nonslip rubber coating on the bottom. It is much thinner than other mouse pads I've used and looks similar to the brushed stainless steel used in kitchen appliances. The looks are nice but what is the advantage with this mouse pad over the cutting board style? I found that mice track much easier on this surface. According to Mionix their in house S.Q.A.T. technology is used to test for data loss. They claim they spent several months minimizing data loss when designing the surface of the Ensis 320. I can't test my old mice pads with S.Q.A.T. but I can attest that the surface is much more comfortable to use. The Naos 8200 mouse tracked very nicely on the surface with no jumps of the mouse pointer (or reticle in games). I noticed that the online pictures are for a black model so I've included images I found from a Google search. Turns out this brushed shiny surface is really hard to photograph!

Another major advantage is that this surface does a great job of staying clean. Sweat, dirt, and even sloughed off skin cells collect on mouse pads and makes for a sticky goo that soon collects on the bottom of the mouse (ever wondered where that stuff came from?). I found that this surface is very easy to clean with just the wipe of a damp cloth. No buildup of nastiness was found after two weeks of use with just a quick daily wipe. Seems trivial but anything that collects on the mouse pad will reflect the laser or LED on your optical mouse and throw off its performance.

Checking prices online I saw everything from $32 to $63 so you definitely should shop around. At first that seems like a lot of cash for a mouse pad but consider what a lot of high end mice cost. If you've made a big investment in your mouse why use that dirty old rubber pad? I'm very happy with the performance improvement over any of my other mouse pads. A lot of people may question the need for a mouse pad but until you try this unit I think you are really missing out. This is a great upgrade for gamers and even office workers. Ever tried to use an optical mouse on a glass topped desk? Yeah, good luck with that one. The Ensis 320 will not only fix that problem but tracks much better than any other pad I have in my inventory.