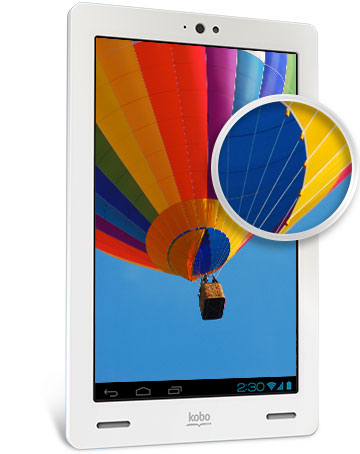 Cons
Typing on the touch keyboard is off a little
A good friend of mine Chuck was an early adopter of the original Kindle Fire. After I played with it at work I bought one for my wife after carefully debating the Fire vs. iPad. Of course the iPad has gone through many changes since then but so did the Fire. I had thought it was definitely time to upgrade to a new Fire HD when I discovered the Kobo Arc. At this time the Nexus 7, Kindle Fire HD, and iPad are clearly the market leaders but that doesn't mean that there isn't another great device out there.

I know what many of you are thinking. Who is Kobo? Kobo is a Canadian company that has been building tablets as long as any of these other Android based companies have. Kobo is sold at many stores in Canada but you can always buy one if you live somewhere else.

On the surface the Arc has many of the same specs as the Kindle Fire HD. Both feature 1280x800 HD screens, dual CPUs, stereo sound, etc. What makes the Arc different is that it features faster CPUs (dual 1.5 GHz vs the Fire's dual 1.2 GHz processors). Also the Arc features something I thought tablet manufacturers would have thought of a long time ago - speakers on the same surface as the screen. I hate broadcasting all my sound out the side of a device. Also, the Arc is available with 64 GB of memory which no other tablet has right now. All this sounds impressive but I think the biggest improvement is the custom touches to the OS that Kobo has added. More on that later.

The Arc is the identical size to my original Kindle. From more than an arm's length away you'd be hard pressed not to think they came from the same company. Get closer and suddenly the intelligent layout of the Arc jumps out at you. Power button on the top of the device, check. Headphone jack towards the top of the device, check. Front facing speakers, check. Volume controls on the right edge (no jumping through menus), check. Turn on the device and that amazing display jumps out at you. Wow - if menus look this good I just couldn't wait to jump in and try real HD graphics.

The version sent to me was the 16 GB Arc. I'm glad that Kobo decided to send the entry level Arc as this really lets me see what effect the extra memory would have, which as it turns out, is none. If you need extra storage for your music library or movies, get the 32 GB or 64 GB version. Be rest assured that this extra storage isn't going to effect your actual speed - the device has a dedicated 1 GB of memory for caching and use by the CPU no matter what version you get. You also get the same CPUs no matter which version you choose. Usually a manufacturer would give you slower performance with the smaller storage units but not Kobo. Good call on their part.

In the box were the device, a simple single sheet start up guide, and the power adapter to charge it. Slick. Just about anyone is off and running after only a couple of minutes with the latest Android OS. In this case the device came equipped with Android 4.0.4. Once you fire up the device if you are accustomed to Android OS you'll see that this is not just another clone.

Kobo has upgraded the OS with what they call 'Tapestries'. What are tapestries? Imagine a folder that sits on the desktop. Not only can your organize apps by their similar function, as they update you can see the changes in the folder directly on the desktop. Put a weather app on the desktop and suddenly it is an auto updating app that doesn't require any input from you. It just gives you the info you need. Group your social network apps together - Facebook, Skype, Pinterest, etc. and you have auto updates sitting there in front of you. One gripe I had with my Kindle was having to scroll through tons of programs to launch a program and then lose access to everything else I was using. No more. Even if you are deep in an app you'll get updates in the lower right corner next to the clock. Wow! Why didn't anyone make Android this good before? By dropping YouTube in a tapestry window I got automatic updates to the most popular videos. Also, if you don't want an app inside the tapestry just drop it directly on the desktop to ease launching. It all gets intuitive after just a couple of minutes. I dropped some books on the desktop I was reading and could access them easily at any time. If you just can't adapt to tapestries a handy button in the upper right button will take you to a standard apps list view.

The built in camera faces you allowing you to Skype or use any app that can utilize it. A cool feature with the camera is that rather than having a code to get into the device you can have the device recognize your face. Now my ugly mug is good for more than scaring kids.

What about that display?

In a word the display is stunning. Web browsing is so much nicer with this display. Text is crisp with great definition between the text and background. My one complaint of the original Kindle was that it tired my eyes over time. Even worse when reading a book. I've read for hours with this device and found it to be a very comfortable experience. I've even read outdoors in bright Southwest sunlight and had no problems. If auto-brightness doesn't work for you its a simple trip into the settings app to adjust it to your liking. I found the automatic settings to be spot on for me.

Next I fired up YouTube and started watching some videos in HD. I've shown this to many of my friends and they just can't believe how much better this display looks than their phones and devices. Even in regular definition the contrast between dark and brights and the quality of the color is amazing. Lastly I installed Netflix and began watching movies in HD. I chose Thor as my first movie. The opening scenes are dark with very bright areas in certain spots on the screen. No pixelation noted and the transition in dark areas is smooth. As the daytime shots started the look of the movie was every bit as good as I expected. Colors aren't over-saturated and the shading in areas is smooth and natural. No ghosting of moving images occurred and computer generated graphics (backgrounds, etc) looked every bit as fake as they do on the big screen. Every movie I watched convinced me this display is leaps and bounds ahead of the original Kindle Fire I've been using.

Here's where one thing gets better. Remember those forward facing speakers? They work great when watching videos and movies. Better yet, the device comes equipped with SRS TruMedia sound. Plug in your headphones or earbuds and the sound is immersive.  The Kindle Fire HD has Dolby audio and dual driver speakers - 4 speakers actually. Thats great except they are rear facing! So if someone has that device in a case the sound is being pumped into the case. Talk about the lack of foresight on that one. I'll take the forward facing speakers on the Arc any day even if they aren't dual drivers. I listened to a lot of music on the Arc and its sound production never let me down.

The Kobo Arc is priced at $199 (16 GB). Same as the Fire HD. It has faster CPUs, a 64 GB model available, an innovative OS adaptation with tapestries, front facing speakers, and that stunning display. This is not a Nexus 7 competitor, this is a Kindle Fire HD killer. Tapestries make the Arc a more usable device, and once you adapt to them, other versions of Android seem primitive without it. Battery life was so much better than my original Kindle Fire. I got two days of use with intermittent heavy CPU usage. Normally I get about 4 to 6 hours with the Kindle Fire using it this way.

I only have one criticism. I thought my fat fingers were having trouble with the touch keyboard. I lent it to my son without mentioning the keyboard and his one comment when he handed it back was that the keyboard was off. I was wondering why I kept hitting wrong keys. I couldn't find a way to calibrate the touch screen to correct this. I'd say get a stylus and you'll fix this problem. For a 7" tablet I can't recommend any other than the Kobo Arc right now.